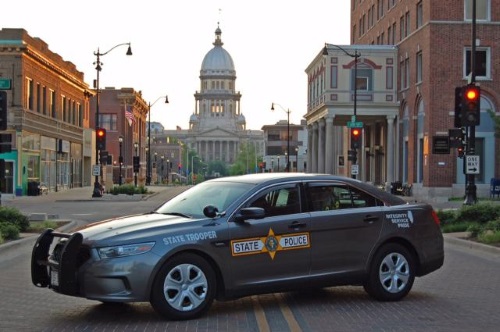 The Illinois Department of Transportation is providing $12.5 million to the Illinois State Police for the purchase and installation of automated license plate readers or ALPRs and related software to aid in the investigation of Cook County expressway shootings.

[Above photo by the Illinois State Police.]

The agency said ALPR installations at 47 locations includes specialized cameras to read the license plate numbers of vehicles moving in traffic. The installations will also include a communication system to backhaul the video images to a central location where additional software will query and match license plates to existing license plate and vehicle databases.

The $12.5 million Illinois DOT grant covers the costs of engineering, work permits, and labor associated with the purchase and installation of readers, controllers, servers/software, electrical power, and communications equipment encompassed within ALPR systems. The maintenance of the ALPR systems for up to two years is also included in this agreement, the agency added.

That technology will help ISP agents investigate the 27 expressway shootings that have occurred so far in 2021; shootings that resulted in 11 injuries and three fatalities.

Tamara Clayton Expressway Camera Act signed into law on July 12, 2019 – named after Tamara Clayton, who was shot and killed on her way to work while driving on Interstate 57 near Cicero Avenue on February 4 of that year – mandates the installation of camera systems along expressways in Cook County to catch such shooters. The law forbids the use of those camera images for ticketing petty offenses, such as speeding.

The Expressway Camera Act requires the ISP, the Illinois DOT, and Illinois State Toll Highway Authority to jointly conduct a program to increase the number of cameras along expressways in Cook County.

“No one should feel afraid for their life or safety on Illinois expressways, and I’ve directed my administration to work collaboratively and creatively to ensure we have assets in place to protect the public,” Governor J.B. Pritzker (D) said in a statement. “Tamara Clayton’s tragic death must not be forgotten, and we must do everything we can to prevent more expressway shootings.”

“Making sure Illinois highways are as safe as possible always is our No. 1 priority at Illinois DOT,” added Omer Osman, acting Illinois transportation secretary. “This agreement, made possible through the efforts of the General Assembly and Gov. Pritzker, is another step in that direction. We look forward to continuing our partnership with ISP and law enforcement throughout the state in finding new ways to protect the public.”