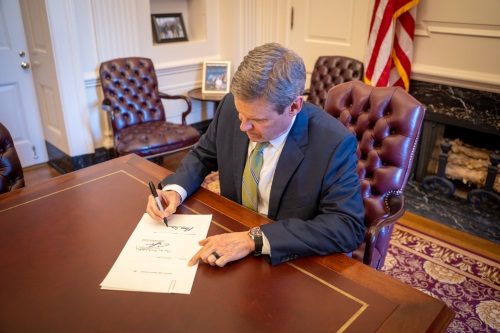 The “State of the State” address by Tennessee Governor Bill Lee (R) (seen above) on February 8 outlined a plan to create a $200 million pool of grants that local governments can use to fund a range of infrastructure investments – from public safety projects, upgrades to utility systems, and new school construction to road improvements.

[Above photo via the Tennessee Governor’s Office.]

The governor also proposed a one-time investment of $200 million to bring high-speed broadband internet access to every state resident. He also proposed a $21 million fund to “directly support rural infrastructure” projects such as industrial site development, small business development, and the revitalization of small-town main streets.

However, a recent report by the Tennessee Advisory Commission on Intergovernmental Relations or TACIR indicates the state needs more infrastructure funding through 2024.

TACIR’s report said that Tennessee needs at least $58.6 billion worth of public infrastructure improvements – an increase of $3.8 billion or 6.9 percent compared to its last report – with almost $3 billion of that overall increase due specifically to escalations in the estimated cost for transportation and utilities.

The uptick in infrastructure costs for transportation and utilities, which increased for the fifth year in a row, are mainly due to new road and sidewalk projects, the group noted.