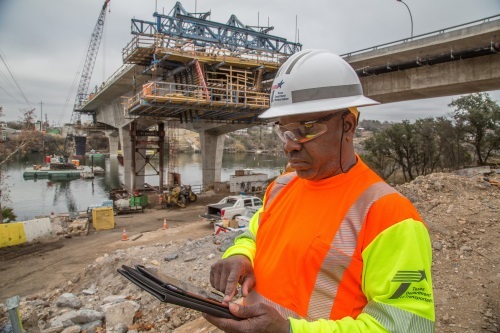 In its 2021 progress report, The Texas Department of Transportation outlined the “continued momentum” maintained by the agency despite the COVID-19 global pandemic to keep more than $24 billion worth of transportation projects on track.

[Above photo by TxDOT.]

“This is a historic time for our state’s transportation system during the COVID 19 pandemic,” explained Texas Transportation Chairman J. Bruce Bugg, Jr. in a statement.

“Because [transportation] is how vital goods and services are delivered,” he added. “This wouldn’t be possible without the 12,000 women and men at TxDOT who are dedicated to ‘Connecting You With Texas’ in rural, urban and metro areas of our great state.”

This past fiscal year alone, TxDOT said in its report that it approved more than $7 billion in construction and maintenance contracts and its payments to contractors increased 26 percent year over year from fiscal year 2019 to 2020. While all those projects aim to improve mobility statewide, they also aim to improve motorist safety, TxDOT stressed.

The agency said in its report that a “major focus” remains reducing congestion and improving mobility in the most congested areas of Texas through the Texas Transportation Commission’s congestion relief initiative, Texas Clear Lanes. That effort, aimed at providing congestion relief through non-toll projects, focuses on tackling the biggest traffic chokepoints in Austin, Dallas, Fort Worth, Houston, and San Antonio – TxDOT’s five metro districts.

“So far, we have completed six major Texas Clear Lanes projects, have 19 other projects under construction, and 18 more in the planning stages,” the agency noted in its report.

Additionally, the commission allocated an extra $600 million toward safety improvements, adding to the safety components and dollars already committed to every project.

The commission also noted that Texas is home to five of the nation’s 13 most populous cities, and as the state continues to attract more people, the demands on the state’s transportation system are increasing daily.

It added that the state’s population grew 15 percent over the past 10 years – adding more people than any other state – and should grow from nearly 30 million people today to 47 million by 2050.