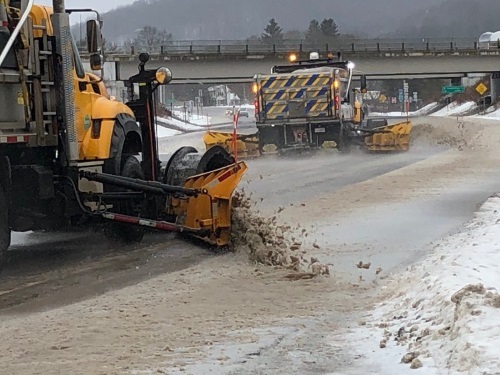 State departments of transportation across the country battled back-to-back winter storms that hit during the week of February 15, hitting Texas particularly hard with snow, ice, and sub-zero temperature knocking offline much of the state’s energy grid.

According to the Weather Channel, snow covered the ground in 73.2 percent of the Lower 48 states by February 16, according to the National Operational Hydrologic Remote Sensing Center or NOHRSC—the highest snow cover for any day in the NOHRSC database dating to the fall 2003.

According to AccuWeather, the economic damage from this outbreak of winter storms could top $50 billion.

Meanwhile, Texas suffered through one of the worst deep freezes suffered by the state since the 1940s, with Dallas at one point registering a temperature of minus 2 degrees Fahrenheit. Millions of Texas residents lost power and were under boil-water advisories as water treatment plants went offline.

The Missouri Department of Transportation warned residents in a statement that rolling blackouts throughout western portions of the state would render traffic signals inoperative.

The agency added that chemicals used to treat the roads lose their effectiveness in the bitterly cold temperatures affecting Missouri and other states, noting that any thawing that occurs during daylight hours will likely refreeze overnight causing patches of black ice and slippery road conditions, particularly on elevated surfaces like bridges and overpasses.

Meanwhile, the Kansas Department of Transportation delayed its monthly construction bid letting by two days – moving it to February 19 – due to the possibility of rolling blackouts that could affect the electronic submittal of bids.

The agency made that decision based on forecasts calling for bitterly cold temperatures and several inches of snow across many areas of the state.

Echoing Missouri DOT’s warning, Jim Frye – Kansas DOT’s emergency management coordinator — noted that due to the extreme cold, the effectiveness of liquid salt brines and granular salts is “diminished significantly” and hinders the melting process on bridges and roadways, with any snow or ice that melts often refreezing within minutes

In addition, with the extremely low temperatures and high wind gusts, dry snow is more likely to blow across the roadways, reducing visibility – especially at night.

“Crews will clear the highways, but winds will blow the snow back, making it more difficult and time consuming for our crews to do their jobs efficiently,” Frye added in a statement.

In Kentucky, Governor Andy Beshear (D) said crews continue working “around the clock” to clear roads as the state prepared for its third winter storm in eight days.

“We have now made it through two winter storms, with a third on the way,” the governor noted in a statement. “If you must travel, it’s still important to be very careful. Slow down, watch out for snowplows, salt trucks and other emergency vehicles.”

“More than 2,000 employee team members plus contractors across the commonwealth are working hard to keep our people safe,” added Jim Gray, secretary of the Kentucky Transportation Cabinet. “I also want to commend the state Division of Forestry, which has provided chainsaw crews to help us clear downed trees in a number of eastern counties. They’ve been a tremendous help. Please limit your travel, drive very carefully and allow extra time to get where you’re going.”

Gray noted in November 2020 that his agency’s “snow fighting” team of 1,024 plow trucks also had to consider the COVID-19 pandemic, which still has the potential for sidelining entire work crews.

“Snow and ice preparations begin long before the winter months and this year has been unique with a health crisis in play,” he explained at that time.

“We’ve done our best to see around the corner by planning how to keep our work crews as protected as possible from COVID, and also how to adapt plans to cover for crews that suddenly have to be taken out of rotation because of COVID,” Gray added. “This is uncharted territory and we will get through this together.”

This week’s severe winter weather also placed renewed focus on work hazards facing snowplow operators. For example, the Wyoming Department of Transportation noted that vehicles hit 10 of its snowplows over a five-day span – February 11 through February 16 – as they worked to clear the roads.

That brings the total number of snowplow strikes to 17 for the winter season, which runs from October through May.

“We want to remind the public to be careful when driving around our plows during winter weather,” noted Wyoming DOT Director K. Luke Reiner in a statement. “Our drivers are out there maintaining the roads by clearing the snow and putting down materials to help keep traffic moving. We want all drivers to pay attention and be careful so everyone gets home safely.”