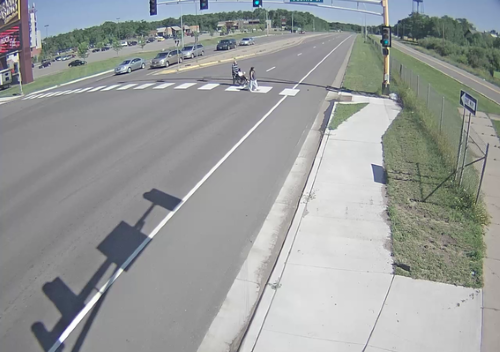 Researchers from the University of Minnesota are helping the Minnesota Department of Transportation plan pedestrian-focused transportation projects on tribal reservations across the state.

[Above photo via the University of Minnesota.]

In order to learn more about pedestrian behavior on reservations across the state and help identify potential safety countermeasures, the agency turned to a research team led by Professor Greg Lindsey with the university’s Humphrey School of Public Affairs and John Hourdos, director of the school’s Minnesota Traffic Observatory or MTO.

They worked on a three-year study funded by the Minnesota DOT that examined pedestrian travel behavior and safety in rural settings.

One of the lessons of the project is that “evidence is essential,” Lindsey explained in a university blog post. “Rural and tribal transportation managers often lack data about pedestrian activity. Evidence such as simple user counts can inform decision making.”

The study’s findings also show that although rural pedestrian crossing volumes are low relative to urban volumes, the risks pedestrians face are real.

“Equity, as well as efficiency, is important,” Lindsey noted. “If efficiency – in other words, the numbers of pedestrians – were the sole basis for investments, agencies would rarely fund countermeasures on reservations. But we believe investments on reservations are needed to redress historical marginalization of tribes and existing disparities in traffic safety.”

Another key takeaway from the study is to engage collaborators early on, he said. For this study, the Advocacy Council on Tribal Transportation served as the technical advisory panel, with tribal transportation managers from four reservations identifying “priority sites” for pedestrian-focused investments.

Minnesota DOT and county engineers then collaborated with tribal transportation managers and the university research team to review monitoring results and identify potential countermeasures for each area of concern.

Lindsey noted that the second phase of a larger study, already in progress, aims to complete field investigations and identify pedestrian safety concerns at sites on additional tribal reservations across Minnesota.