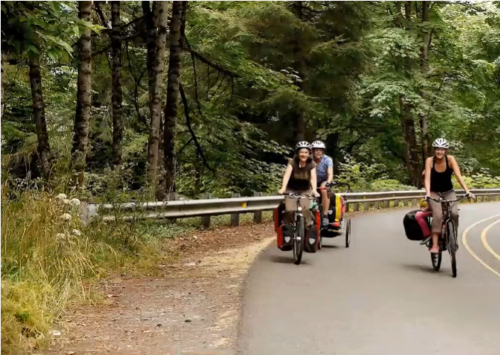 Over the last 16 years, the American Association of State Highway and Transportation Officials and the Adventure Cycling Association worked with state departments of transportation and other local transportation agencies to identify and install signage for nearly 15,000 miles of bicycle routes in 31 states and the District of Columbia.

Ultimately, the plan is to establish more than 50,000 miles of bike routes across the country.

On February 23, AASHTO and Adventure Cycling signed a memorandum of understanding or MOU to formalize this 16-year partnership.

Adventure Cycling’s Pankratz said that signing this MOU comes at a time when “it is more important than ever since we’ve seen a surge in bicycle sales and cycling due to the [COVID-19] pandemic. It is exciting to see the momentum building to build bicycle corridors connecting both rural and urban America as this [national bicycle route] network prepares to tip over the 15,000-mile mark.”

Twice each year, AASHTO’s U.S. Route Numbering Special Committee reviews and recommends to the AASHTO Board of Directors a number of revisions, additions, or deletions to the U.S. numbered routes and Interstate Highway System. The special committee also reviews and recommends the approval of new and revised U.S. bicycle routes that are critical to the expansion of the U.S. Bicycle Route System or USBRS.

In addition, AASHTO’s Committee on Planning works with Adventure Cycling to maintain and update the broader USBRS National Corridor Plan that identifies corridors for future bike routes. The USBRS is a cornerstone of Adventure Cycling’s work as a national nonprofit dedicated to inspiring, empowering and connecting people to bicycle travel.

AASHTO’s Tymon explained in comments made during the virtual signing ceremony that the “creation of a national bike route network mirrors that of the national interstate system.”

He added that AASHTO’s partnership with the Adventure Cycling Association “has been a huge benefit to this project,” noting it “has helped educate state DOTs about route options, develop maps and promotion materials, and provide the valuable groundwork needed to identify and publicize the bike routes to the bicycle community.”

Shawn Wilson, Ph.D. – secretary of the Louisiana Department of Transportation and Development and AASHTO’s 2020-2021 vice president – added that this MOU not only “enhances opportunities to expand bicycle usage into more rural settings” but also serves to “ensure we highlight all aspects of transportation.”