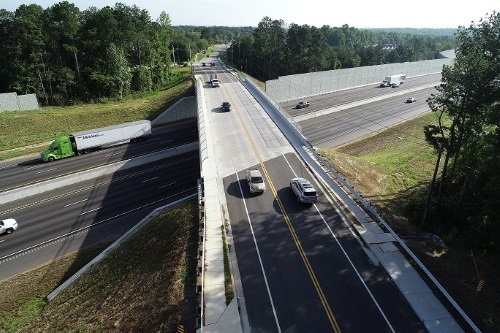 State governments moved forward with nearly 111,000 federal-aid highway and bridge projects during the past five years due to funding provided by the Fixing America’s Surface Transportation or FAST Act, according to new research by the American Road & Transportation Builders Association.

[Above photo by the Georgia DOT.]

Compiled from Federal Highway Administration data, ARTBA said between fiscal year 2016 and 2020, states leveraged nearly $200 billion in federal funds to support more than $340.5 billion in highway and bridge program improvements due to the FAST Act.

“Our research illustrates tangible success stories of the federal highway program,” said Dave Bauer, ARTBA’s president and CEO, in a statement. “Such real-world project outcomes would be even more robust under the highway and transit investment bills advanced by the House and Senate in the last Congress.”

He added that ARTBA released this report to coincide with hearing held by the Senate Committee Environment & Public Works on February 24; a hearing focused in part on the need to reauthorize surface transportation program legislation by September 30.

Alison Premo Black, ARTBA’s chief economist, prepared this report and noted that one-third of the monies provided by the FAST Act – some $113 billion – was dedicated to highway and bridge projects on the Interstate Highway System, while another 30 percent, or $102 billion, went towards work on the National Highway System.

Other federal-aid highways accounted for 26 percent of the total, or $90 billion, the group said.