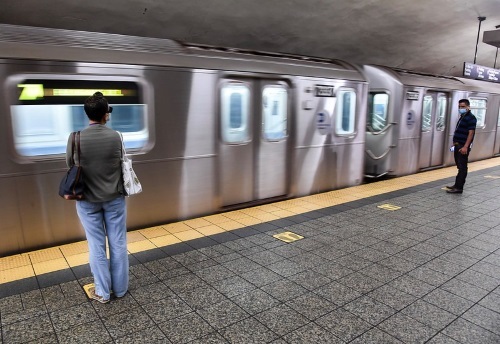 The Department of Homeland Security’s Science and Technology Directorate is collaborating with the Metropolitan Transportation Authority in New York City to study how simulated airborne droplets carrying the COVID-19 virus – droplets known as “aerosols” – travel through buses and train cars.

That research aims to help develop better disinfection and other viral mitigation methods other U.S. transit agencies can use.

[Above photo by the MTA.]

“[Our] main mission is to ensure that our cities are secure from both the spread of COVID-19 and potential weapons of mass destruction threats,” explained Don Bansleben, who leads the initiative for DHS’s S&T group, in a statement.

“We are developing capabilities, tools and resources in New York City that other states, cities and localities can use to better prepare for, respond to and recover from the pandemic or other emergency,” he added.

Bansleben noted that this project is “just one example” of how the S&T’s Urban Security Initiative or USI is working to ensure the security of U.S. public transit systems from hazards – be they natural, accidental or intentional in nature. S&T is also developing and perfecting various “threat detection technologies” for public transit system through this and other collaborative projects to not only help protect high-density urban areas against viral outbreaks but also acts of terrorism.

It should be noted that as of February 2 all travelers into, within, or without of the United States on airplanes, ships, ferries, trains, subways, buses, taxis, and ride-share vehicles must wear face masks – a mandate put in place by the Centers for Disease Control.

Many of USI projects involve both laboratory and field tests, because what works in a lab may not work in the field. That is why S&T is collaborating with New York City’s transportation, health, and public safety agencies, as well as federal counterparts, to simulate real-world threat environments and hazards as part of a whole-of government approach to preparedness and resiliency.

As part of the viral phenomenology study that took place in early February, S&T released a benign airborne coronavirus simulant into out-of-service MTA buses, subway, and commuter train cars to see how a virus travels when somebody breathes, coughs, or sneezes.

A similar test conducted by the U.S. Transportation Command in August 2020 indicated that the overall exposure risk from aerosolized pathogens such as COVID-19 “is very low” on Boeing 767-300 and 777-200 commercial aircraft – the airplane models the command uses to move Department of Defense personnel and their families.

That test – dubbed the Commercial Aircraft Cabin Aerosol Dispersion Test – revealed that the test aerosol released into the aircraft’s passenger compartment became “rapidly diluted” by the high air exchange rates observed in the airframes in less than six minutes. For comparison, a typical American home takes around 90 minutes to clear these types of particles from the air, U.S. Transcom said.

Meanwhile, Michael Gemelli – who manages environmental detection and emergency response initiatives for MTA New York City Transit – noted that the viral transmission study MTA hosted for DHS is one of the “practical ways” federal agencies could help “fast-track projects that can have an immediate impact and influence procedure and policy to keep people safe.”

“As part of the DHS mission, S&T doesn’t just provide support to our components – we are also responsible for helping state and local agencies prepare for emergency events,” DHS’s Bansleben pointed out. “Partnerships like the USI are vital because we cannot work in a vacuum. This is a shared responsibility. You must work closely with partners to understand their needs and concerns. This is a good formula for success.”

Several earlier studies noted that there is “no direct correlation” between use of urban public transit and transmission of the COVID-19 virus.

For example, a 35-page report compiled by the Sam Schwartz transportation-engineering firm on behalf of the American Public Transportation Association indicates there is “minimal risk” of COVID-19 infection from using public transit, especially where specific safeguards are in place, such as face coverings, well-functioning ventilation systems, and minimal talking by riders.