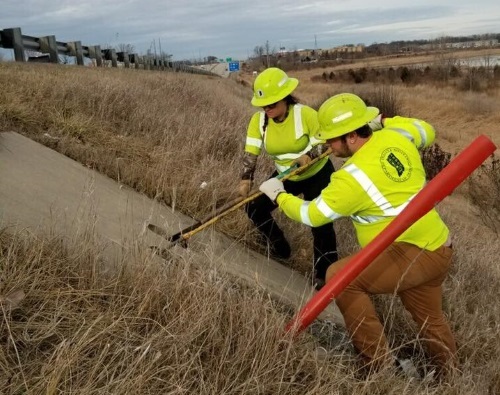 The Indiana Department of Transportation is disbursing $100.8 million in federal and $24.1 million in state transportation funding to 54 cities, towns, and counties in rural portions of Indiana to support local road and bridge improvements as well as sidewalk and trail projects.

[Above photo by the Indiana DOT.]

“Our sustained commitment to modernizing local roads and bridges, adding sidewalks, and growing our trail networks sends a clear message that we’re building cities, towns and counties that are primed to attract and retain talent and spur job growth in the 21st century economy,” he said.

The types of projects receiving money via this funding disbursement include 32 bridge rehabilitation/replacement projects, 11 resurfacing/reconstruction projects, five traffic safety projects, and six Transportation Alternative Program or TAP projects that include work such as sidewalks, Americans with Disabilities Act-compliant curb ramps, and trails.

For this latest round of funding, rural communities will design, develop and purchase land for projects that would be bid during the fiscal year beginning July 2025. While this funding is dedicated to construction, the Indiana DOT said it would be financially participating in design, engineering, and right of way acquisition components of these projects.

The agency added that it dedicates approximately 25 percent of its federal highway funds to supporting local projects each year. Metropolitan Planning Organizations distribute those funds to cities, towns, and counties within the state’s larger urbanized areas while the Indiana DOT distributes funds outside MPO areas.

Communities must pay at least 20 percent in local matching funds and meet other federal requirements to receive federal funding, the agency added.