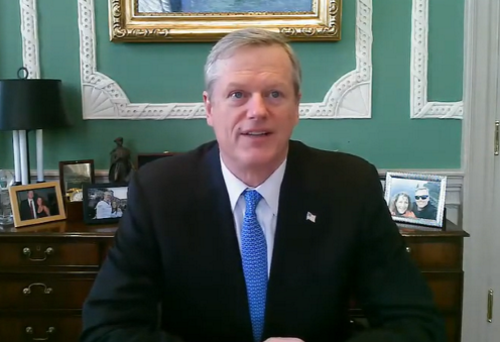 Governor Charlie Baker (R) (seen above) participated in a virtual signing ceremony on February 17 to highlight passage of a $16 billion Transportation Bond measure in January – a measure he has pushed the state legislature to pass for nearly a year, albeit one with a larger dollar amount.

That legislation includes nearly $5.1 billion to continue modernizing the MBTA, $100 million to improve the pavement condition on state numbered municipal roads, $50 million to ensure municipalities have resources needed to continue efforts to build “Complete Streets” infrastructure to encourage the public to travel more on foot and by bicycle.

The bill also includes $70 million for the Municipal Small Bridge Program and expands the use of designated bus lanes and transit signal priority through two new grant programs. Additionally, the bill authorizes the MBTA to use well-established procurement methods such as “Job Order” contracting for smaller projects.

Chapter 90 funding measure requires cities and towns to submit receipts for their transportation projects to the particular MassDOT Highway Division district in which they are located, which in turn verifies that the expenditures qualify for reimbursement under Chapter 90. Those districts then file those receipts with MassDOT’s fiscal department, which issues the reimbursements.

A final municipal funding initiative authorized by this bill would improve the condition of local roadways by authorizing $100 million for a municipal pavement partnership program to help cities and towns care for locally owned state-numbered routes.

“The Transportation Bond Bill builds upon our administration’s ongoing commitment to create a 21st-century mobility infrastructure that will prepare the Commonwealth to capitalize on emerging changes in transportation technology and behavior,” said the governor said in a statement.

“MassDOT and the MBTA have continued to implement widespread improvements throughout the transportation system and this new bond authorization will further support capital investment planning to rebuild, modernize, and expand the capacity of the Commonwealth’s transportation infrastructure,” he added.