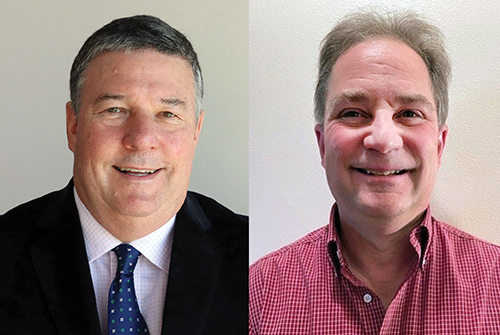 [John Leonard at left and David Kuniega at right in photo above. Photos courtesy of ATSSA.]

In a statement, the group said John Leonard, the Utah DOT’s traffic management division operations engineer, received ATSSA’s national safety award in recognition of his efforts to improve roadway safety via the deployment of solutions within the Federal Highway Administration’s Manual of Uniform Traffic Control Devices.

Kuniega, who retired this month, is a decade-long “recognized leader” in the pavement marking industry known for his leadership and integrity within the state DOT community, which enabled industry input into the development and maintenance of national material specifications and testing protocols, said in nominating him.

“It is well known within the pavement marking industry that David has single-handedly opened doors to allow industry input to improve the AASHTO specifications as well as the NTPEP testing protocols,” noted Paul Carlson, chief technology officer at Road Infrastructure Inc., who nominated Kuniega for the award.

“His national leadership is felt within every state DOT as well as by every striping contractor and material manufacture,” Carlson said. “The nation’s highways are safer than ever, partly because of dedicated leaders like David.”

Carlson himself received ATSSA’s Industry Achievement Award – the association’s highest honor and given to an ATSSA member who achieves distinction deemed worthy of special recognition and who has made significant contributions to the roadway safety infrastructure industry.