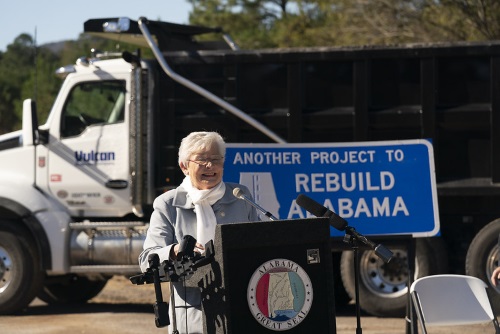 Governor Kay Ivey (R) (seen above) and the Alabama Department of Transportation recently issued $4.93 million in state funding to cities and counties for various road and bridge projects – the latest distribution from an annual grant program created under the Rebuild Alabama Act.

[Above photo via the Alabama Governor’s Office.]

Passed in 2019, the Rebuild Alabama Act required the Alabama DOT to establish an annual program setting aside $10 million of the state’s share of a new 10-cent-per-gallon motor fuel tax hike for local transportation projects.

“More and more Alabamians are seeing road projects in their communities,” Gov. Ivey said in a statement. “As we near the second anniversary of the passage of the Rebuild Alabama Act, we are showing the people of our state that we are true to our word, and money is being spent wisely. All revenue is being used to enhance critical infrastructure to make Alabama a better place to live, work, and play.”

The governor’s office noted that 21 local transportation projects are receiving funds from this latest disbursement and all of them are required to move forward within one year of receiving those funds.

Of those awarded projects, 17 cities and counties contributed a total of $2.08 million in local matching funds, though matching funds are not required to be eligible for Rebuild Alabama funding, the governor’s office noted.

Gov. Ivey’s office added that this is the second year of funding awards via the new Annual Grant Program. In 2020, that program awarded a total of $10.2 million to support local transportation projects over two rounds of funding disbursements.

PennDOT’s Leslie Richards Tapped to be General Manager of SEPTA