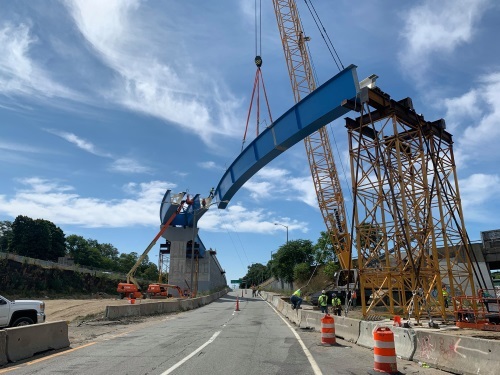 The American Society of Civil Engineers report on the state of U.S. infrastructure reiterated the need for investment in transportation networks, especially for bridges as the “letter grade” for that infrastructure category declined in 2021 versus the organization’s 2017 report.

ASCE’s 2021 Report Card for America’s Infrastructure gave U.S. infrastructure an overall C- grade and while that marked an improvement over the D+ grade from the group’s 2017 report card and is the highest overall grade in 20 years, it found that the nation’s long-term infrastructure investment gap continues to grow.

According to the group’s report, that “investment gap” increased to $2.59 trillion compared to $2.2 trillion in its report four year ago – meaning that funding gap climbed by nearly $260 billion per year since 2017.

“We have not made the investments to maintain infrastructure that in some cases was built more than 50 years ago,” noted ASCE Executive Director Tom Smith in a statement. “As this study shows, we risk significant economic losses, higher costs to consumers, businesses and manufacturers – and our quality of life – if we don’t act urgently. When we fail to invest in infrastructure, we pay the price.”

Using an A to F school report card format, ASCE’s report assessed current infrastructure conditions and needs across 17 categories. The individual 2021 grades ranged from a “B” for rail to a “D- “for transit. Despite incremental gains, 11 of the 17 categories received a grade in the “D” range, including roads, while five category grades – aviation (D+), drinking water (C-), energy (C-), inland waterways (D+), and ports (B-) – increased from its 2017 report. However, one category – bridges – declined to a “C” grade.

Some of fiscal data ASCE compiled for its 2021 report card where transportation investment is concerned include:

Kristina Swallow – chair of ASCE’s Committee on America’s Infrastructure and director of the Nevada Department of Transportation – hosted a question-and-answer session with key lawmakers and federal agency leaders as part of the March 3 rollout of the ASCE’s 2021 report card.

As part of that discussion, U.S. Secretary of Transportation Pete Buttigieg emphasized that a more “bottom-up approach to programs and funding” for infrastructure investment is necessary.

“It’s going to help us marshal the full power of American ingenuity, innovation, and capacity,” Buttigieg said. “Because all the answers don’t have to come from Washington; it’s just that more of the resources should. [That’s why] I’m also looking forward with state, local, territorial, [and] tribal partners – communities that have often made tough decisions to vote in measures to raise the revenue for infrastructure.”

ASCE also noted in a 12-page report released in September 2020 that the “cumulative investment gap” between what the United States currently spends on surface transportation infrastructure versus what it needs to spend to decrease traffic congestion and maintain its assets in a state of good repair is approximately $5 trillion in 2019 dollars.

The ASCE said that report – entitled Failure to Act: The Implications of Investment Trends in our Surface Transportation Infrastructure – focuses on the impact of transportation deficiencies on U.S. economic performance. It also quantifies the “existing gap” between what the nation currently spends on bridges, roads, and transit systems versus what is needed to get the systems into a “state of good repair.”

Subsequently, the report extends these trends out to 2039 to explore how underinvestment affects everything from personal household income to overall economic competitiveness.

Victoria Sheehan, commissioner of the New Hampshire Department of Transportation and the 2020-2021 president of the American Association of State Highway and Transportation Officials, touched on some of those same issues during a Senate Committee on Environment and Public Works hearing on February 24 – especially where federal funding is concerned.

“States like New Hampshire rely especially heavily upon the federal surface transportation program in order to enable the necessary infrastructure investments for our citizens,” she explained in her testimony.

“And a stable federal surface transportation program has become even more crucial as [we] deal with the continued loss of state revenue due to the impacts of the [COVID-19] pandemic,” Sheehan stressed. “Any delay – or even worse, a series of short-term extensions – would wreak havoc across the country. [It] would impact not just state DOTs but our partners such as local governments and the construction industry.”