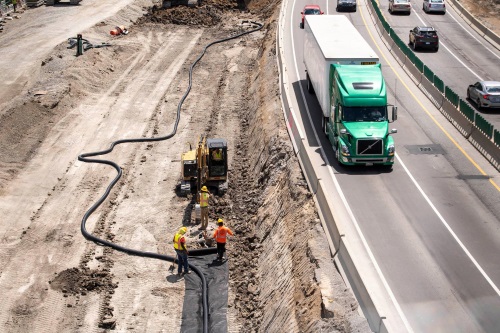 Goods moved on America’s transportation network increased in both value and tonnage from 2012 to 2017, according to the latest version of the Freight Analysis Framework or FAF jointly issued by the Federal Highway Administration and Bureau of Transportation Statistics.

FHWA noted that it releases FAF benchmarks at five-year intervals and that they incorporate BTS Commodity Flow Survey data, international trade data from the Census Bureau, and data directly from specific economic sectors such as agriculture, energy extraction, utility, construction, and the service industry, among others.

The agency added in a statement that it would release FAF estimates for 2020 freight flows later in 2021 – data that will account freight transportation changes due to the COVID-19 pandemic.

Trucks remain the most commonly used mode to move freight, according to FHWA’s FAF calculations, transporting 64 percent of the weight (12.7 billion tons) and 72 percent of its value ($13.7 trillion) in 2017.

The agency noted that FAF data helps both the public and private sectors understand freight movement better, aid transportation planners in targeting resources to improve operations or increase capacity, and aids states in the development of their freight plans.

Victoria Sheehan – commissioner of the New Hampshire Department of Transportation and the 2020-2021 president of the American Association of State Highway and Transportation Officials – touched on the critical importance of transportation infrastructure investment in related to freight planning during a Senate Committee on Environment and Public Works hearing on February 24.

“A well-performing transportation network allows American families to benefit both as consumers from lower priced goods and as workers by gaining better access to jobs; and also allows businesses to manage inventories and move goods more cheaply and get employees reliably to work,” she explained in her written testimony.

“Projects that state DOTs undertake connect people, enhance the quality of life for our citizens, and just as important, they stimulate economic growth in each community where they are built,” Sheehan said.