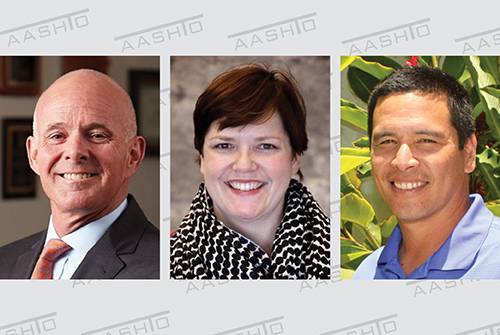 Three state department of transportation executives shared their insights into the strategies they use to address everything from infrastructure resiliency to cybersecurity during the 2021 virtual American Association of State Highway and Transportation Officials Washington Briefing.

Ed Sniffen, deputy director for highways at the Hawaii Department of Transportation, noted that his agency views “resilience” as a way to not only make infrastructure more robust and last longer, but save money as well.

“We’re making sure resiliency is built right into our project planning processes,” he explained. “But we also view it as a way to save on cost. For example, on one project, instead of re-stabilizing slope prone to rockfalls, we extended a tunnel to better protect the road. That cost us $20 million versus $150 million to stabilize the slope.”

Margaret Anderson Kelliher, commissioner of the Minnesota Department of Transportation, stressed that each state needs to look at the specific severe weather events that affect their areas so they can tailor infrastructure designs appropriately to maximize resilience.

“For us, we’re seeing more localized flooding, erosion, invasive species, and drought,” she said. “But there is less risk for wildfire and severe wind.”

Her agency also often considers a “step back” where infrastructure is concerned – for example re-routing low volume roads away from areas prone to flooding rather than rebuild them.

“It is not always about building back better with infrastructure,” Anderson Kelliher said. “Often we need to plan whether it should be there in that location in the first place. That’s why we are really trying to pilot using ‘climate resilience’ in our corridor plans and how to support emergency repairs going forward.”

That “emergency planning” also plays a critical role when it comes to managing a state DOT’s digital infrastructure, she said.

“Cybersecurity is a critical point for us as state DOT leaders,” Anderson Kelliher said. “We have more connected devices at the Minnesota DOT than any other agency in our state. Yet what happens when you have more points of access is that bad people have more opportunity to do bad things to our system. This is an important part of resilience not paying enough attention to – cybersecurity resilience.”

She noted that Minnesota DOT polls its maintenance and operations staff regularly about what worries them when it comes to digital security and other infrastructure issues. “It’s about using the intelligence of our people to do problem-solving ahead of time,” Anderson Kelliher said.

Carlos Braceras, executive director of the Utah Department of Transportation and AASHTO’s 2018-2019 president, noted that the “bottom line” in both resiliency and digital security discussions is that “transportation just has to work” but especially so in emergencies.

“We all understand transportation is about enhancing quality of life,” he said. “But the transportation system really becomes a ‘front-and-center issue’ when you need to keep it open – that’s when our departments become the front-line response. And part of that response is being able to respond in the first place: our emergency operations plan.”

That response hinges on state DOT worker availability and, “if our employees do not have a way to make their families safe in an emergency, we can’t expect them to focus on department goals,” Braceras stressed.

He also noted that damage to transportation infrastructure is sometimes inevitable so part of the “resiliency strategy” comes from a state DOT’s emergency response plans.

“Maybe we need to beef up our emergency response, or stage certain materials at certain locations ahead of a severe weather event: maybe that becomes our resiliency strategy,” he said. “It is incumbent on all of us to know risks, build resiliency or redundancy to address those risks, and then construct an emergency response to handle the impact of severe weather and other events.”