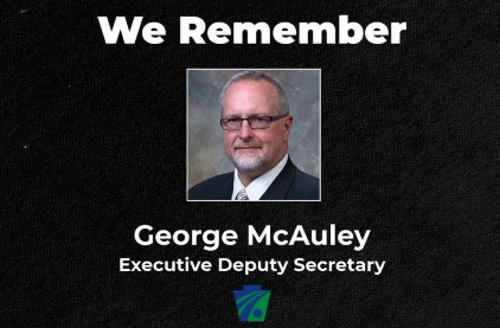 George McAuley, a longtime veteran of the Pennsylvania Department of Transportation who most recently served as the agency’s executive deputy secretary, passed away suddenly in February.

[Above image via PennDOT.]

McAuley had also chaired the steering committee of the American Association of State Highway and Transportation Officials Innovation Initiative, known as A.I.I., since March 2019.

“George had a significant impact on all of us and the people of Pennsylvania,” noted Yassmin Gramian, PennDOT secretary, in a Twitter post.

“He was passionate about our mission, innovation, and about setting us on a positive course during these challenging times with an eye on the future,” she said. “This is a huge loss for all of us and the entire PennDOT family.”

McAuley graduated from Pennsylvania State University with a degree in civil engineering. He spent his early career as a construction project manager for the Texas Department of Transportation in Houston and then for GAI Consultants before joining PennDOT.

During that time, he led a cooperative effort with the Pennsylvania Asphalt Pavement Association and the Federal Highway Administration on a quality management pilot for asphalt paving labeled “Pasin” and aided in the advancement of Pennsylvania’s Rapid Bridge Replacement Public Private Partnership or P3 contract.

During his time as leader of A.I.I., McAuley believed there would be a big safety benefit to the broad deployment of connected and autonomous vehicles or CAVs.

“CAVs offer a huge opportunity to reduce [fatality] numbers,” he explained during a panel discussion at AASHTO’s 2019 Spring Meeting.

“I don’t know how that future trends out, but the advantage is that human behavior factors go away as a factor if CAVs are deployed widely over the next decade,” McAuley said. “So by 2030 and 2040 we could witness a huge decline in [traffic] fatalities. It’s not that far out – in 10 years I think we’ll see quite a bit of [CAV] volume. So we need to make sure our infrastructure is aligned and ready for it.”