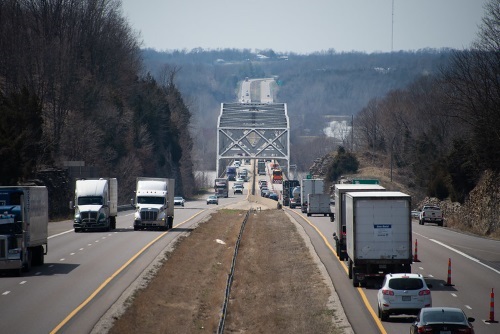 The Missouri and Maryland departments of transportation recently wrapped up efforts to select companies to handle major state transportation projects: the I-70 Rocheport Bridge project in Missouri and the American Legion Bridge I-270 to I-70 Relief Plan in Maryland.

[Above photo of the Rocheport Bridge by MoDOT.]

The Missouri DOT recently selected four firms to compete for the Rocheport Bridge’s $240 million design-build contract, which will replace the existing I-70 bridge as well as reconstruct the Route BB interchange just east of the bridge. In no particular order, they are:

“[Those] four short-listed teams are all very experienced and capable of producing a successful project,” noted Brandi Baldwin, the Missouri DOT’s project director, in a statement. “We look forward to moving forward in the process and selecting the final design-build team.”

The agency noted that design-build projects combine both the design and construction phases into one contract, with the Missouri DOT providing the project goals, budget, and schedule, while the contractor team conducts the physical work.

The Missouri DOT added that a $81.2 million Infrastructure for Rebuilding America or INFRA grant from the U.S. Department of Transportation in July 2019 helped jump start the Rocheport Bridge project

Meanwhile, the Maryland Department of Transportation selected Accelerate Maryland Partners, LLC, to be the developer responsible for overseeing pre-development work on the American Legion Bridge I-270 to I-70 Relief Plan.

“This is another step forward in addressing one of the most significant traffic bottlenecks in the nation,” noted Greg Slater, Maryland DOT secretary, in a statement. “I want to thank all of the teams that pursued this Phase 1 partnership with Maryland and the teams of experts that spent almost 200 total hours reviewing and deliberating over the amazing proposals.”

He added that though “there is much more work to do with the local leaders, the community, and stakeholders,” the selected proposal delivers congestion relief at the American Legion Bridge, strong innovative approaches for minimizing impacts, and what Slater described as a “real multimodal approach.”

Over the life of the 50-year agreement, the Accelerate Maryland Partners proposal includes $300 million worth of commitments for transit improvements, a $50 million community grant program, $5 million worth of Vision Zero investments, $25 million to support emerging technologies through an innovation alliance, and water quality enhancements.