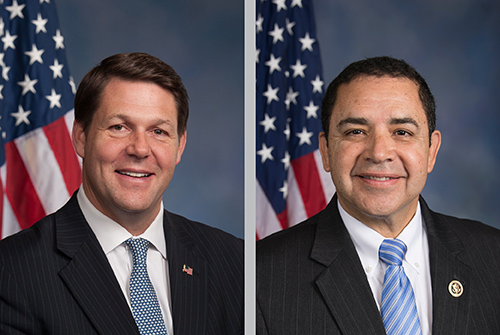 The new “Port-to-Plains” highway bill would expand and upgrade a series of U.S routes and interstates running from Laredo, Texas, to Canada through a number of Midwestern states.

According to both congressional representatives, the Ports-to-Plains Alliance Corridor investments would improve economic development, safety, and efficiency for America’s Heartland region.

If signed into law, Reps. Arrington and Cuellar said in a statement that the highway expansion could help increase Texas’s gross domestic product by $55.6 billion in the first 20 years.

“I’m very proud to be working across the aisle with my friend and colleague, Rep. Henry Cuellar, on this important piece of bipartisan legislation,” said Rep. Arrington.

“Establishing a four-lane federal highway from West Texas through the Heartland is critical to enhancing America’s agriculture and energy dominance,” he added.

“This investment in rural America will strengthen the supply from the largest agricultural and energy production centers to the rest of the country,” Rep. Arrington noted.

“To fully reap the benefits of the UMSCA [the 16-year long United States–Mexico–Canada Agreement that became effective July 2020] it is critical that we invest in strong international transportation infrastructure,” said Rep. Cuellar.

“This bipartisan legislation will increase trade routes for agriculture and energies industries in Texas and throughout the country. With the I-27 corridor extension, Laredo will have three interstates, which will alleviate traffic and open business opportunities,” he pointed out.

“As the representative for the country’s busiest port of entry, I am committed to making strong investments in our in transportation infrastructure to support cross-border trade and expand our economy,” Rep. Cuellar said.

Both Rep. Arrington and Rep. Cuellar noted that the 2,300-mile Ports-to Plains Alliance Corridor extends from Mexico to Canada through eight states in America’s Heartland. Part of the National Highway System, it makes up about 5 percent of the nation’s roads yet carries more than 55 percent of the vehicle miles travelled, they noted.

The Port-to-Plains Corridor also serves major energy production areas of the country – such as the Bakken, Niobrara, Permian Basin, Cline, and Eagle Ford shale regions, as well as the oils sands area in Alberta, Canada – along with four of the top eight farming states.