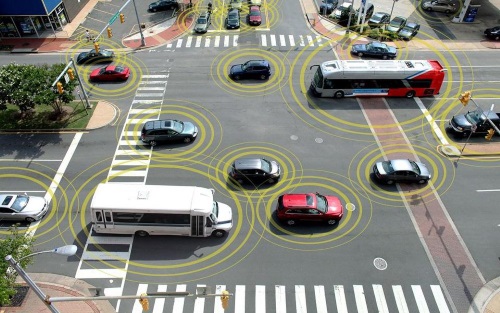 In a joint letter, the American Association of State Highway and Transportation Officials and Intelligent Transportation Society of America urged federal officials to revisit plans to open the 5.9-gigahertz (GHz) wireless communication spectrum to non-transportation usage.

[Above image by NHTSA.]

The March 11 letter addressed to three federal officials – Pete Buttigieg, secretary of the U.S. Department of Transportation; Gina Raimondo, secretary  of the U.S. Department of Commerce; and Brian Deese, director of the  National Economic Council – expressed “significant concern” with efforts underway at the Federal Communications Commission since November 2020 to reallocate spectrum in the 5.9 GHz band.

“Reducing the amount of spectrum available to vehicle-to-everything (V2X) technology undermines our shared interest in reducing the number of traffic injuries and fatalities that occur each year on U.S. roadways,” the groups said in their letter.

Since 2019, AASHTO has repeatedly warned the FCC that efforts to open the 5.9 GHz spectrum to “unlicensed devices is “wrong and misguided” and will “put future safety and mobility improvements” at risk.

[AASHTO’s Tymon also addressed those issues in a 2019 “On Time with Tymon” video series episode.]

“Paramount to state DOTs is both eliminating the nearly 37,000 fatal vehicle crashes which occur on our roadways each year as well as the safe deployment of connected and automated vehicles,” the organization said in a 23-page letter to the FCC in March 2020.

“Without the full 5.9 GHz spectrum available to use for connected vehicle technologies it will be significantly more difficult to eliminate these fatal vehicle crashes,” AASHTO noted.

In fact, the leaders of all 50 state departments of transportation, the District of Columbia, and Puerto Rico signed a letter to the FCC in August 2019 highlighting how critical it is to “continue our nation’s commitment to improving transportation safety” by reserving the 5.9 GHz wireless spectrum for transportation-only usage.

AASHTO also co-signed with 13 other organizations a separate letter to the FCC in November 2019 that said it is “essential that the entire 5.9 GHz band – all seven channels – be retained for V2X, and that all measures are taken to smooth the path for deployment.”

AASHTO and ITS America added to those arguments in their March 11 letter with data points regarding the potential safety benefits of V2X technology for pedestrians, bicyclists, and residents of low income and minority communities in both urban and rural areas.

The organizations noted in their letter that pedestrian fatalities jumped by 51 percent from 2009 to 2019, accounting for 17.2 percent of all traffic deaths in 2019. Additionally, bicyclist fatalities are up 36 percent since 2010.

Those statistics become “even more disturbing in low income and minority communities,” the letter stressed. Between 2009 and 2018, pedestrian deaths rose 69 percent in urban areas, while bicycling deaths increased by 48 percent. Furthermore, Latino bicyclists face fatality rates 23 percent higher than whites do, while for African American bicyclists, they are 30 percent higher.

That’s why V2X technologies, supported by the 5.9 GHz spectrum, are “tools to make roads safer for all users and [help] to increase transportation equity within the United States at a time when the status quo has allowed fatalities in these groups to dramatically increase over the last decade” AASHTO and ITS America said in their letter.

Rep. Peter DeFazio, D-Ore., chair of the House of Representatives Transportation & Infrastructure Committee, sent a separate letter on March 18 to the FCC also calling for agency to re-examine its 5.9 GHZ spectrum-sharing decision.

“V2X communications and the technologies they will enable … will make our transportation networks smarter, more efficient, and, most importantly, safer,” Rep. DeFazio stressed in his letter. “Simply put, V2X technologies will save lives.”

However, he stressed that – in its actions to date – the FCC appears “more concerned with faster Wi-Fi” than transportation safety.

“The FCC’s decision ignored the safety concerns raised by USDOT, bipartisan opposition from 38 members of Congress, every state department of transportation in the nation, and the entire transportation stakeholder community,” Rep. DeFazio emphasized. “Instead [the FCC] approved an unsafe proposal that stands to undermine roadway safety.”