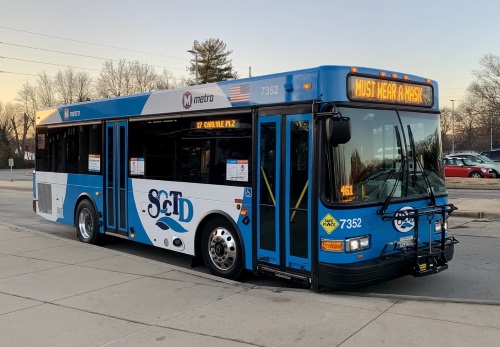 The American Association of State Highway and Transportation Officials recently released a new report entitled Commuting in America 2021: The National Report on Commuting Patterns and Trends—Brief 21.1. The Changing Nature of Work – the first in a series of several reports produced by the Census Transportation Planning Products or CTPP program on the subject of commuting in America.

[Above photo by Metro Transit.]

“For the past several years, the trend towards the acceptance of nontraditional work locations has been on the rise. For obvious reasons, this trend spiked during the 2020 COVID-19 pandemic as governments and health officials encouraged alternative work arrangements that minimized personal contact,” explained Phil Mescher with the project management bureau at the Iowa Department of Transportation.

“As transportation planners look to plan for the future, it is important to have a sound statistical baseline of the travel characteristics of workers who chose to telecommute, worked at home or had non-traditional jobs prior to the pandemic,” he said.

“Having this baseline allows transportation planners and travel analysts to confidently measure the changes to the U.S. workforce, the commuting public and enable us to make confident predictions about what to expect in future years,” Mescher noted. “With these predictions, it allows for more informed decision making pertaining to our future transportation system.”

One of the goals of this report to help researchers and policymakers interested in quantifying the amount and type of changes in the U.S. workforce in 2020 and later.

As a result, it explores the demographics and travel of workers in four types of “non-traditional” work: those who usually work at home, those who telecommute, those who have flextime, and those involved in contract or “gig” work.

Some of the key findings from this report include:

This report can be ordered via the AASHTO Store by clicking here.