Caltrans: Rebuilt Section of Highway 1 Could ‘Last for Centuries’ 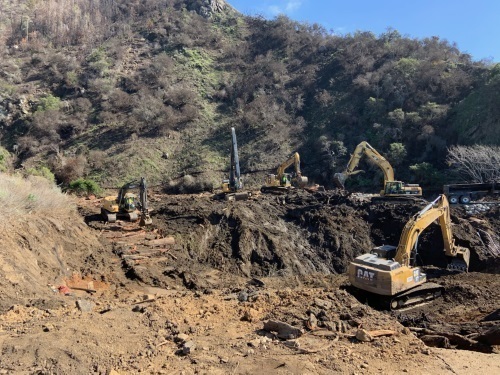 Recent hydrological studies indicate to the California Department of Transportation that it can rebuild a washed-out section of the famed Pacific Coast Highway with a massive new drainage system that would protect the roadway well past the 22nd Century.

Three days of heavy rains spawned a river of mud, boulders, and fire debris on January 28 that overwhelmed a 150-foot section of the iconic Highway 1, sending it into the ocean. A five-mile section of the roadway remains closed at Rat Creek on Monterey County’s Big Sur Coast while contractors work toward an early summer re-opening.

“We’re returning the road to how it was before, but with modern engineering,” said Caltrans Public Information Officer Kevin Drabinski.

The washout left a V-shaped cavity where the old fill had cradled a 66-inch culvert for Rat Creek. Contractors will re-fill, compact the material and bore the fill to accommodate a 10.5-foot culvert before rebuilding the roadway atop the fill.

“Our hydrological studies looked at models of another large fire followed by intensive rain,” he noted. “We’re confident this new design will stand for centuries to come.”

Drabinski added that the old culvert was installed decades ago and simply couldn’t handle the swollen creek that carried boulders, fire debris, mud and a lot of water, all fueled by 17 inches of rain in three days. A massive tree trunk jammed the culvert, turning the creek into a lake and the highway into a dam. Eventually, the water and debris overtopped and washed out the road.

Contractors are hauling away tens of thousands of cubic yards of fill material while also properly disposing of the debris left behind by the landslide, Drabinski pointed out.

“There are designated sites for the debris haul,” he said. “We have very specific rules about how we dispose of that. You can’t just haul it away. You can’t throw a mudball into the Pacific Ocean.”

Caltrans believes it can finish the work by early summer, depending on rain. Crews are working every day, “and we’re making hay while the sun shines for now,” Drabinski emphasized.