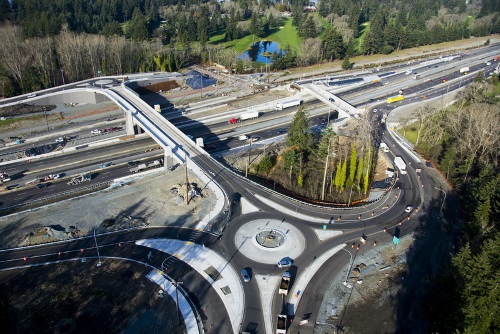 Those projects – led by six state departments of transportation and two transportation coalitions – will explore a variety of ways to provide long-term fiscal support to the Highway Trust Fund.

“The pilot projects under the STSFA program allow states to learn more about potential new user fees structures that can complement traditional funding sources that states rely on to build and improve the nation’s highway and bridge infrastructure,” said Stephanie Pollack, FHWA’s acting administrator, in a statement.

Since its creation five years ago via the Fixing America’s Surface Transportation or FAST Act, FHWA said the STSFA grant program provided $73.7 million to 37 projects in states to test the design, implementation, and acceptance of a range of user-based systems, such as mileage-based fees. They also support outreach by transportation officials to help the public understand these new methods.

One report from the Eastern Transportation Coalition – which focuses on solving transportation challenges along the Eastern Seaboard – noted that public opinion is the first key issue that must addressed when contemplating the deployment of user-based fee systems.

“Mileage-based user fees are a viable option,” explained Patricia Hendren, the coalition’s executive director, in a statement. “The public is open to the ‘user pays’ principle and the technological capabilities exist, but our research highlights important issues to consider before implementation.”

However, the group’s report also found that the public’s intuitive understanding of a “pay for what you use” approach could be a place to start.

Nearly two-thirds of the general public or 61 percent said “pay for what you use” would be a reason to support a mileage-based user fee or MBUF model, according to statewide surveys the Coalition conducted. After experiencing the pilot, 83 percent of 2019 pilot participants said MBUF was as fair or more than fair compared to fuel taxes.

“As part of our Pathways program we’re studying many different options, including mileage-based user fees, to find reliable funding approaches for our residents,” added Yassmin Gramian, secretary of the Pennsylvania Department of Transportation. “Studies like these provide important data for making smart, sustainable decisions.”

Meanwhile, the American Transportation Research Institute issued a new report on March 17 detailing the costs of deploying and operating a national vehicle miles traveled or VMT tax – a cost it estimates would reach $20 billion annually.

The central reason for that cost is the shift in collection points – from a couple hundred fuel terminal operators to every registered motor vehicle in the United States, which currently totals 272 million vehicles.

Additionally, the report found that hardware costs alone would have an initial price tag of $13.6 billion and require ongoing replacement, telecommunications costs would be approximately $13 billion annually, and account administration would be an additional $4.3 billion each year.

On top of these costs, ATRI’s report said credit card transactions for electronic payment and even the shipping costs for the hardware could each cost more than $1 billion.