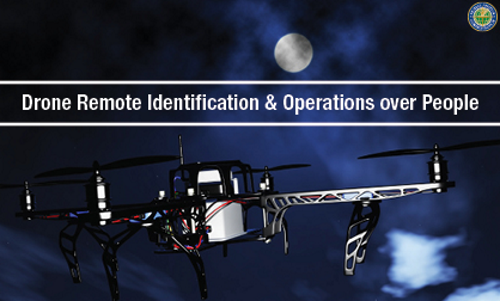 The Federal Aviation Administration said final rules requiring remote identification of drones and regulations allowing some drone flights over people, moving vehicles, and at night under certain conditions would go into effect on April 21.

[Above image via the FAA.]

The FAA said in a statement that its remote identification or “Remote ID” rule – initially issued in December 2019 – requires identification of drones in flight as well as the location of their control stations or takeoff point.

It also provides crucial information to national security and law enforcement agencies while improving “airspace awareness” in order to reduce the risk of drone interference with other aircraft, people, and property on the ground.

Meanwhile, the “Operations Over People” rule applies to pilots who fly under Part 107 of Federal aviation regulations. Part 107 currently prohibits drone operations over people, moving vehicles, and at night unless the operator obtains a waiver from the FAA.

However, prior to flying under the new provisions, a remote pilot must pass the updated initial knowledge test or complete the appropriate updated online training course, which will be available on April 6.

The “Operations Over People” rule also requires that remote pilots have their remote pilot certificate and identification in their physical possession when flying. It also expands the class of authorities who may request these documents from a remote pilot.