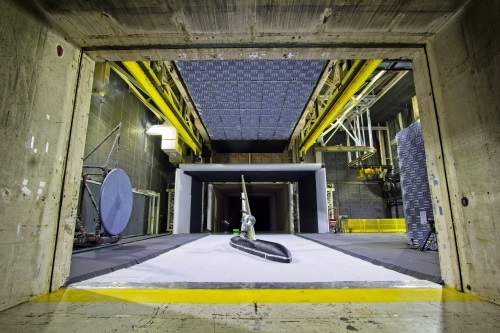 In an effort to reduce loud take-off and landing noise around airports, NASA is testing an experimental leading-edge wing design for commercial aircraft – recently completing an initial round of wind tunnel testing January 21 at its Langley Research Center in Hampton, VA.

[Above photo by NASA.]

“Mitigating this noise emission not only has direct benefits to residents living near airports but also has financial benefits as the landing fees at many airports are tied to the noise generated by the aircraft using the runways,” explained David Lockard, NASA’s primary investigator on this project, in a statement.

“The non-propulsive sources of aircraft noise include high-lift devices like the leading-edge slat and trailing-edge flaps of the aircraft’s wing,” he added. “Model-scale tests, fly-over noise measurements and numerical simulations have identified the leading-edge slat as a prominent source of airframe noise during aircraft approach.”

NASA researches built a 10-percent scale version of this experimental wing design – known as the “Quiet-High-Lift version of the Common Research Model” or CRM-QHL – to evaluate various aircraft enhancements including low-noise slats.

“Shape-memory alloys allow them to undergo the relatively large deformations needed for the devices to stow when the slat is retracted,” said Lockard.

“Low-noise slats were developed using small-scale testing and computational techniques that assessed their aerodynamic, structural, and acoustic performance,” he added.

Lockard noted that NASA would continue testing the QHL-CRM wing during the spring of 2021 at its Langley facility, focusing on ways that the global aircraft industry can readily adopt it.

Reducing aircraft noise in and around airports is also a major focus of the Federal Aviation Administration.

The agency recently noted in a statement that successfully addressing aircraft noise requires “continued collaboration among all aviation stakeholders.”

In this regard, the FAA said its research programs provide “important insight” into the relationship between aircraft noise exposure and the well-being of people living in communities surrounding the nation’s airports.

It recently detailed its latest noise findings in the Federal Register; insights gained in part via its Neighborhood Environmental Survey – a multi-year research effort based on a poll of 10,000 people living near 20 airports across the country.