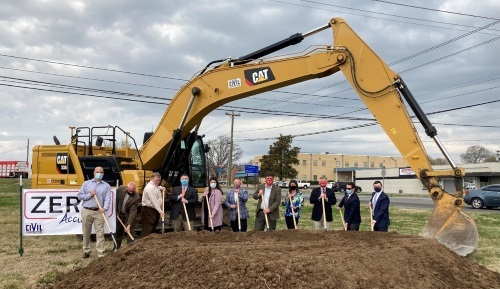 The Tennessee Department of Transportation recently broke ground on the $61 million Jefferson Pike highway-widening project, to support that growth and make safety improvements to the corridor while also wrapping up construction of the Great River Road Visitors Center at Reelfoot Lake State Park; a facility expected to serve as a “gateway” for visitors to a nearby state park.

[Above photo by the Tennessee DOT.]

The Tennessee DOT said its Jefferson Pike project seeks to widen approximately four miles of the existing two-lane roadway to four travel lanes from Nissan Drive to Interstate 840 to support economic growth in the region as well as improve multimodal safety.

In terms of safety improvements, the project – due to be completed in August 2024 – will build an additional center turn lane at intersections, add traffic signals, and improve highway access ramps, as well as add extra bike lanes and sidewalks to better protect bicyclists and pedestrians.

“We are happy to get this important widening project underway,” said Clay Bright, the agency’s commissioner, in a statement.

“Smyrna and the Rutherford County area are growing rapidly. This project will help support that growth and make safety improvements to the corridor,” he added.

Meanwhile, the recently completed Great River Road Visitors Center – built in cooperation with the Tennessee Department of Environment and Conservation – is expected to serve as a “gateway” for visitors to the park and northwest Tennessee as well as those traveling the Great River Road scenic byway.

The building will serve as a gathering place for programming, including eagle tours, and support interpretive elements of the park.

“The opening of this new facility not only improves the visitor experience to the Reelfoot area, it connects the traveling public to the communities of Lake and Obion counties,” Bright noted in a separate statement. “This partnership and this center will bring greater education, enjoyment and economic activity to this scenic corner of Tennessee.”

According to a report compiled for the Tennessee Department of Environment and Conservation, the economic impact of Tennessee State Parks totaled $1.84 billion in 2020 and handled 34.7 million visits. The state invested roughly $184 million in capital projects for its park system in 2020, which the agency expects to result in over $400 million worth of economic impact to Tennessee.