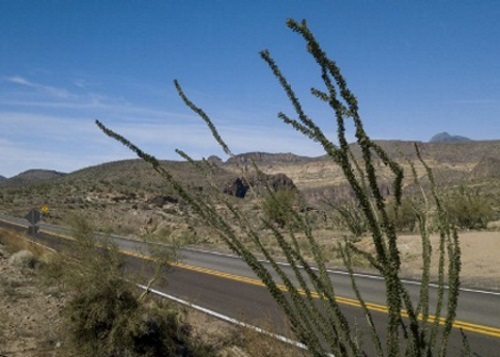 As an 11-mile reconstruction project along Interstate 10 between Interstate 17 and the Loop 202 gets ready to start, biologists with the Arizona Department of Transportation are preparing to relocate native plants out of the way.

The agency said its crews are identifying state-protected plants in the planned construction zone – such as ocotillo and saguaro and barrel cactus – and studying roughly 2,500 trees to identify native species, including palo verde, mesquite and ironwood.

The Arizona DOT plans to relocate most of them into temporary nurseries during construction, transplanting them back to their roadside habitats when construction work is complete.

“Protecting the natural Arizona environment is an important part of our work,” said Robert Samour, senior deputy state engineer and leader of Arizona DOT’s major projects group, in a statement.

“There were more than 1,000 plants along the South Mountain Freeway that we maintained for more than three years and replanted after construction to preserve the plants and the beautiful landscape,” he said.

[The Arizona DOT conducted a similar relocation effort in 2018 for native cactus plants located near a bridge replacement project on U.S. 60 where that highway crosses Pinto Creek six miles from the town of Miami, which is a little more than 81 miles due west of Phoenix.]

The agency anticipates construction will be complete by late 2024, with the project ultimately improving travel time and safety, as well as easing access to Phoenix Sky Harbor International Airport and supporting local, regional, and state economic growth.