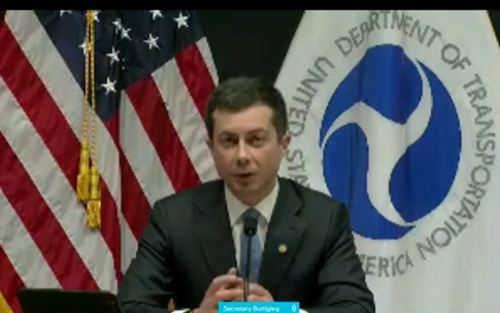 U.S. Transportation Secretary Pete Buttigieg (seen above) and members of the House of Representatives Committee on Transportation and Infrastructure discussed the possible priorities for a potentially $2 trillion-plus infrastructure funding package during a hearing on March 25.

Sec. Buttigieg, appearing via video, noted in his remarks that “this moment [offers] the best chance in any of our lifetimes to make a generational investment in infrastructure that will help us meet our country’s most pressing challenges today and create a stronger future for decades to come.”

He explained that, “across the country, we face a trillion-dollar backlog of needed repairs and improvements, with hundreds of billions of dollars in good projects already in the pipeline. Now is the time to clear the backlog and repair our highways, roads, bridges, maritime ports, and airports, to enhance freight and passenger rail, and to provide accessible public transit and mobility options for all.”

Sec. Buttigieg added that the Biden Harris administration’s priorities also include a “commitment to transportation reliability and safety and ensure that families will no longer have to mourn tragic deaths that could have been prevented.” That also encompasses an effort to “finally address major inequities—including those caused by highways that were built through Black and Brown communities, decades of disinvestment that left small towns and rural main streets stranded, and the disproportionate pollution burden from trucks, ports, and other facilities.”

Rep. Peter DeFazio, D-Ore., who chairs the T&I committee, said any proposed funding package must “build in resiliency” not only for climate change but also for other “severe events” as well, such as wildfires, hurricanes, and the like.

“We’re not doing ‘Eisenhower 8.0’ – we have to rebuild the system we have but we must also have an eye on the 21st century and the challenges of the 21st century,” Rep. DeFazio said in his opening remarks.

“The bill passed by our committee last year [the Moving Forward Act] will be the starting point for this year’s legislation,” he noted. “We also want state DOTs to help provide safer, more equitable, cleaner, and less carbon polluting transportation and reach out to people left behind – dealing with underserved communities and whose voices who have not been heard and undo some of the damage done in past.”

Rep. DeFazio added that he intends to provide greater local decision-making within any infrastructure funding measure, allowing for more Congressional member input as well via earmarks.

Rep. Sam Graves, R-Mo., the committee’s ranking member, countered that completing a five-year bipartisan highway bill “should be the top priority for this committee,” adding that “I don’t think any bill can be a trillion-dollar ‘catch all’ bill; a transportation bill needs to be transportation bill, not a ‘Green New Deal’ but a bill about roads and bridges.”

Rep. Graves noted that his party’s priorities center on building more equity between rural and urban areas, finding ways to reduce transportation emissions and protecting the environment while spending the taxpayer’s money wisely, plus “carefully considering” that funding going into any transportation package after all the money spent via COVID-19 relief bills.

In particular, he pointed to the $30.5 billion in transit sector assistance included within the $1.9 trillion COVID-19 relief package, known as the American Rescue Plan or ARP, reconciled between the House and the Senate and signed into law by President Joe Biden on March 11. That legislation allocated $100 billion overall to the transportation industry.

“We have to ensure that the billions flowing to transit agencies are shared with contractors who have worked hand-in-hand to keep transit systems functioning,” Rep. Graves said.