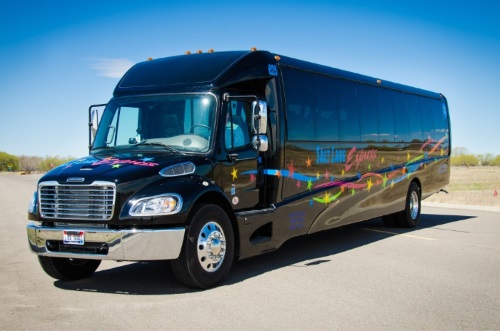 [Above photo by Salt Lake Express.]

Cumulatively, the agency projects that those routes could provide trips for up to 18,250 people during their first year of operation.

The Nevada DOT also noted in a statement that it created the new daily bus service in part due to public feedback provided during the development of its Coordinated Human Services Transportation Plan. Nearly 70 percent of state residents surveyed as part of that plan cited such intercity transit connecting Nevada’s rural areas to services in larger urban and metropolitan cities as a “top transit priority.”

The agency added that the new bus services are funded in part by the roughly $10 million the Nevada DOT receives annually from the Federal Transit Administration to support rural public transportation offerings.

The FTA noted that – according to federal data – for every $10 million in transit investment, business sales increase an average of $30 million.

Those efforts dovetail with recommendations in a final report issued by the FTA’s Coordinating Council on Access and Mobility in October 2020 – a group established in 2004 by President George W. Bush that coordinates federal programs to improve access to jobs, schools, healthcare, and other opportunities.

That 65-page report – identifies barriers to state and local transportation coordination that “make it difficult to reduce duplication, fragmentation, and overlap of transportation services.”