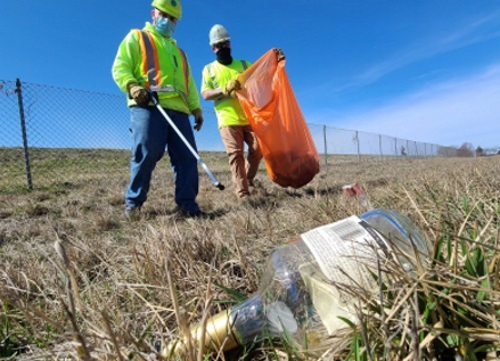 The Ohio Department of Transportation is launching a public outreach campaign to reduce litter along state roadways – emphasizing that agency crews assigned to pick up trash are being diverted from more important tasks, such as patching potholes, replacing culverts, and other work.

The Ohio DOT said its crews collect more than 400,000 bags of other people’s trash from along state roadsides each year – and effort costing roughly $4 million annually.

“Sadly, that time and money goes to address an issue that’s 100 percent preventable,” the agency said in a statement.

“The same men and women who pick up trash along our roadways also perform other vital work like plowing snow, patching potholes, repairing guardrail, mowing grass, and replacing culverts,” the agency emphasized. “Picking up other people’s trash takes them away from those important jobs.”

Other state departments of transportation are engaging in similar outreach efforts to reduce roadway litter.

The Missouri Department of Transportation launches its annual highway litter cleanup effort – dubbed the ‘No MOre Trash! Bash’ – on April 1. The agency added in a statement that it spent $6.4 million to remove litter from more than 385,000 acres of roadsides along 34,000 state highway miles in 2020.

The Missouri DOT also noted its annual volunteer efforts to pick up litter along state highways – including the Adopt-A-Highway program – are valued at more than $1 million.

The North Carolina Department of Transportation is gearing up for its annual Spring Litter Sweep​ to remove trash from along the state’s roadways, which will run from April 10-24 this year.

To date, the agency said its crews, contractors, and volunteers have already collected some 1.8 million pounds of litter from roadsides statewide since January 1.

“We are only just beginning this year’s efforts to clean up and prevent litter on our roadsides,” noted Eric Boyette, NCDOT’s secretary, in a statement. “But we need everyone’s help. We all are responsible for keeping North Carolina clean and beautiful.”

The South Carolina Department of Transportation noted that 1,700 of its employees picked up 13,130 bags of roadside trash weighing 209,725 pounds on November 17, 2020, in support of Lt. Gov. Pamela Evette’s “Grab A Bag SC 2020” statewide cleanup program.

The Virginia Department of Transportation launched a public outreach campaign entitled Virginia is for Lovers, Not Litter in September 2020; noting that it spends nearly $3.5 million annually to remove litter from Virginia’s roadways, with more than half of that litter coming from motorists with another 25 percent from pedestrians.

The cost of litter removal from state roadways does not come cheap. In February 2020, the Pennsylvania Department of Transportation released the results of a Pennsylvania Litter Research Study that indicated trash cleanup efforts removed more than 502 million pieces of litter from Pennsylvania’s roads.

That study found that the most common trash collected by roadside cleanup efforts are cigarette butts (37 percent) and plastics (30 percent), while plastic film and beverage containers are the most prevalent items – with an estimated 29.3 million beverage containers alone littering the state’s roadways.

Pennsylvania’s cities collectively spend more than $68 million annually on cleanup, education, enforcement, and prevention efforts related to litter and illegal dumping, the study found, with PennDOT spending upwards of $13 million per year on staff and resources to pick up litter along state-owned roadways.