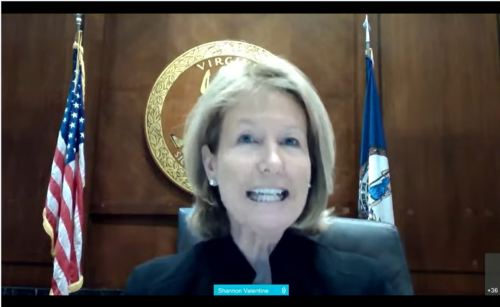 Shannon Valentine (seen above), Virginia’s secretary of transportation, explained via video during a hearing of the House of Representatives Committee on Transportation and Infrastructure Subcommittee on Railroads, Pipelines, and Hazardous Materials on March 10 that railroads play a critical role within a “multimodal approach for creating an economy that works for all people.”

She noted in her written testimony that expanding and improving passenger, commuter, and freight rail service can help deliver “exponential economic impacts” on both a state and regional level.

“[Virginia has] prioritized projects that will move as many people and goods as possible across all modes of transportation in an equitable, environmentally sustainable manner, with a focus on job retention and creation,” Valentine explained.

“This is a multimodal approach for creating an economy that works for all people. According to APTA [the American Public Transportation Association] every $1 billion invested in rail creates 24,000 highly skilled jobs and every $1 invested generates $4 in wider economic benefits,” she said.

Valentine pointed to the December 2019 $3.7 billion deal between Virginia and freight railroad CSX – an agreement that transferred track and bridge ownership to the state, creating a pathway to separate passenger and freight operations along the Richmond to Washington, D.C., corridor – as one example of the type of broad regional railroad projects that should be championed in the future.

“Under this program, the Commonwealth will construct a $1.9 billion bridge over the Potomac dedicated to passenger rail, acquire 386 miles of rail right-of-way and 223 miles of track, and invest an additional $1 billion in rail infrastructure projects over the next decade,” Valentine said.

“Our purpose in doing so is to expand and improve passenger, commuter, and freight rail service, establish a pathway to separate passenger and freight operations, and create a vital link in our national rail network by connecting the Northeast and Southeast corridors,” she noted.

Such projects, however, require multi-year federal grant agreements that match up with state and local investments, she added, because such funding is what allows states to properly plan for large-scale intercity passenger rail projects and then reap longer-term economic and quality-of-life benefits.

“The Long Bridge construction reaches beyond the benefits to the rail and road networks and the environment,” Valentine noted. “A study by George Mason University estimates that construction of a new Long Bridge – and the resulting increase in passenger trains – is expected to facilitate more than $6 billion in additional economic activity in the Northern Virginia and Washington, D.C., region each year.”