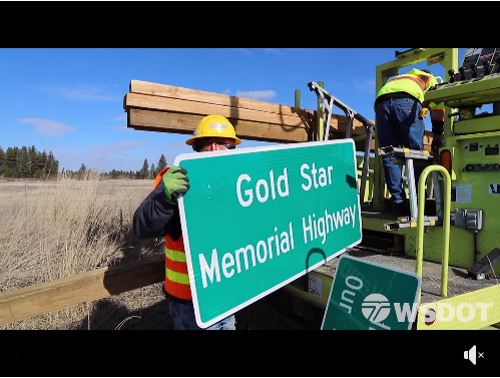 [Above photo by the WSDOT.]

SR 902 is the primary route traveled to reach Medical Lake, home to the Washington State Veterans Cemetery, the agency said; the final resting place for more than 6,300 veterans and family members.

According the U.S. Department of Defense, the “Gold Star” designation effort – which began in 1917 with American military involvement in World War I – honors the loved ones of fallen service members in the nation’s overseas conflicts.

“We are honored to be a part of this simple act of recognition where we can all pay tribute to fallen heroes and those who live with their loss,” said Mike Gribner, WSDOT regional administrator, in a statement.

“The important act of naming this highway assures that their decision to serve will always be honored and remembered,” he noted.

The sign unveiling is the culmination of work by the Eastern Washington Veterans Task Force, the state’s oldest veteran support coalition, which took up this initiative along of SR 902 to honor the fallen and their families.

State legislator Marcus Riccelli sponsored the name change for SR 902, which the state’s transportation commission unanimously approved in September 2020. WSDOT then installed the signs as soon as weather allowed at mileposts 1 and 12 along SR 902.