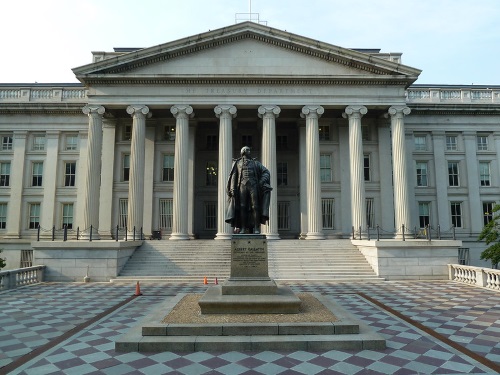 The American Association of State Highway and Transportation Officials co-signed a March 28 letter with 35 other transportation organizations to Janet Yellen, secretary of the U.S. Department of the Treasury, to provide “clear guidance and flexibility” regarding the use of American Rescue Plan or ARP funds to support transportation infrastructure projects .

[Above photo of Treasury Department headquarters by Matt Robinson.]

Joung Lee, AASHTO director of policy and government relations, noted that the $150 billion in general state/local aid incorporated within the $2 trillion Coronavirus Aid, Relief, and Economic Security or CARES Act legislation passed in March 2020 “took a while to spend down” as states received “unclear and changing guidance” from the Treasury Department at the time.

While the $350 billion in general state/local aid issued by the ARP “is much more flexible,” AASHTO noted it “does not specify transportation being as an eligible expenditure.”

That is why the group’s letter calls upon the Treasury Department to issue a guidance that explicitly says transportation is eligible, so states have certainty that they can spend the funds on transportation projects.

“States and local transportation revenues were hit hard by COVID-19, with 49 states publicly projecting declines,” the letter noted. “State departments of transportation are also facing at least $18 billion in estimated revenue shortfall through 2024.”

That is why providing “clear guidance and flexibility” on the use of ARP funds for transportation infrastructure projects “will be critical to ensuring funds are used expeditiously and with maximum impact.”