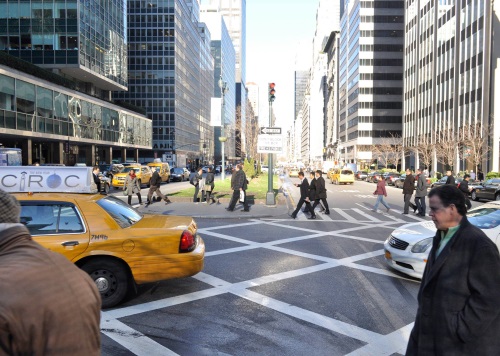 A New York plan to charge tolls for driving into and through Midtown Manhattan got some good news from the federal government in the form of a quicker environmental review of its congestion-pricing proposal.

[Above photo by the NYC DOT.]

FHWA officials had previously explained that New York must become part of FHWA’s Value Pricing Pilot Program to be able to implement congestion pricing – and entering that program triggers a review under the National Environmental Policy Act. An EA generally requires less time to complete than an Environmental Impact Statement if it identifies no significant environment impacts, the agency said.

“The FHWA looks forward to assisting New York so we can arrive at a prompt and informed NEPA determination on this important and precedent-setting project,” explained Stephanie Pollack, acting FHWA administrator, in a statement – noting that the EA will analyze traffic volumes and air quality impacts of the proposed tolling program.

“This approach will ensure that the public participates as local and state leaders explore new possibilities for reducing congestion, improving air quality and investing in transit to increase ridership,” she said.

Under the congestion-pricing proposal for New York City – originally created in 2019 – local officials would charge a once-daily variable toll for vehicles entering or remaining within the “Central Business District,” an area stretching from 60th Street in Midtown to Battery Park.

New York officials estimate the plan would generate $15 billion over four years for the MTA for needed improvements in the existing transit system. If implemented, the proposal would become the nation’s first cordon congestion pricing toll zone of this scale.