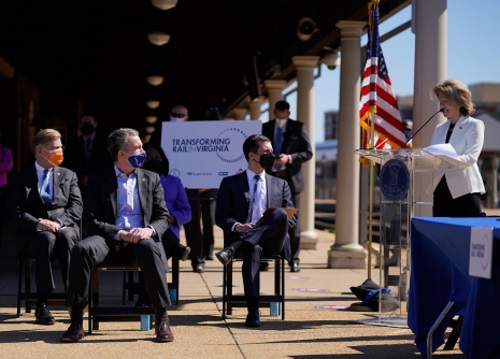 The Commonwealth of Virginia finalized agreements with Amtrak, CSX, and Virginia Railway Express so it can officially launch a $3.7 billion investment to expand and improve passenger, commuter, and freight rail in Virginia while also creating a “vital connection in America’s national rail network” between the Northeast and Southeast corridors.

The finalization of the agreements – dubbed the “Transforming Rail in Virginia Initiative” and first announced in December 2019 – allows construction to advance on significant rail infrastructure projects in Virginia.

The partner agreements support the construction of a $1.9 billion bridge over the Potomac River dedicated to passenger rail, acquisition of 386 miles of railroad right-of-way and 223 miles of track from CSX, plus an investment by the Commonwealth of more than $1 billion in additional infrastructure improvements.

As part of the finalized deal, Amtrak is committing $944 million over the next decade to cover 30 percent of the cost of the improvements within the Transforming Rail in Virginia program.

In addition, the Commonwealth and Amtrak are entering into a long-term partnership for six new state-supported daily roundtrips, with Amtrak serving as Virginia’s exclusive provider of intercity passenger rail service along the I-95 corridor for at least 30 years.

The deal will also help the Port of Virginia increase its rail network capacity, which needs to increase by 45 percent before 2040 to handle a threefold increase in shipments.

Altogether, those investments allow Virginia to expand Amtrak and VRE services, create a pathway for the separation of freight and passenger rail in Virginia, and preserve future rail corridors, said Governor Ralph Northam (D) in a statement.

“We have an unprecedented opportunity to build a 21st century rail system in Virginia and along the entire East Coast,” he explained.

“This historic initiative will help get people and goods where they need to go more efficiently, reduce congestion and pollution, and create a more inclusive economy,” the governor noted.

“Together with our partners at Amtrak, CSX, and VRE, we are making critical investments that will fundamentally transform our transportation infrastructure, delivering long-term economic benefits for our workers and communities as we rebound from the pandemic and into the future,” he said.

Shannon Valentine, Virginia’s secretary of transportation, noted that the new Transforming Rail in Virginia initiative would help Virginia’s economy grow by $2 billion annually and improve the mobility of passenger and freight rail. According to the American Public Transportation Association, every $1 billion invested in rail creates 24,000 highly skilled jobs, and every $1 invested generates $4 in wider economic benefits.

“This initiative represents a historic achievement in expanding and improving the performance of rail transportation,” she said. “Together, we are creating a path towards separating passenger and freight rail and building a vital link in our national rail network between the Northeast and Southeast corridors.”

[Valentine made similar arguments regarding the economic value of railroad investments during a House of Representatives Committee on Transportation and Infrastructure hearing on March 10.]

“VPRA is a unique, independent entity designed specifically to own and acquire rail infrastructure, partnering with Amtrak to fund intercity rail operations,” noted Jennifer Mitchell, director of the Virginia Department of Rail and Public Transportation. “Once fully mobilized, VPRA will oversee the Transforming Rail in Virginia program to promote, sustain, and expand the availability of rail service in the Commonwealth.”