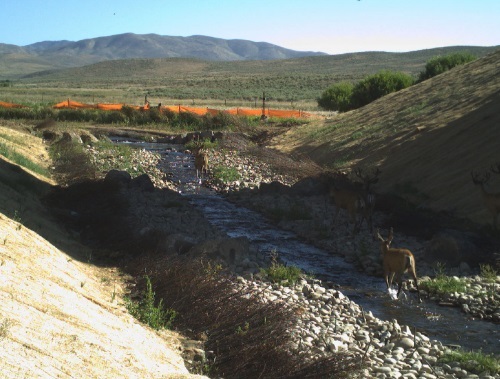 The construction of the new Rock Creek Bridge to replace a culvert on US-20 recently won an engineering excellence award from the American Civil Engineers Council of Idaho – an award shared by the Idaho Transportation Department (ITD) and Jacobs Engineering.

[Above photo by ITD.]

The new bridge now allows wildlife to pass under the highway, reducing the risk of possible collisions involving wildlife and vehicles on the roadway.

The ITD added in a statement that this particular section of US-20 witnessed 64 vehicle-wildlife collisions over the last five years, which totals a “societal cost” of approximately $2 million when adding together the cost of vehicle repair or replacement, medical bills, and increased insurance rates – not to mention the cost to wildlife.

The project also allowed the ITD to restore the streams forded by the new bridge to a more natural condition, which in turn should positively benefit the surrounding ecosystem by encouraging safer fish passage under the highway.

Building a bridge also reduced the impact on the local environment versus replacing the existing multi-plate culvert with a similar culvert design, ITD added.

This was one of ITD’s first projects incorporating ‘fabric encapsulated soil lifts’ into a design – a way to ensure streambank stability as water levels rise and fall while still promoting vegetative growth.

The project has already improved the environment while enhancing the safety and the natural beauty of the project area, ITD added. Just a few months after construction, the agency noted fish swimming upstream to spawn, while it spotted several deer – and a moose – traveling along the channels under the bridges.