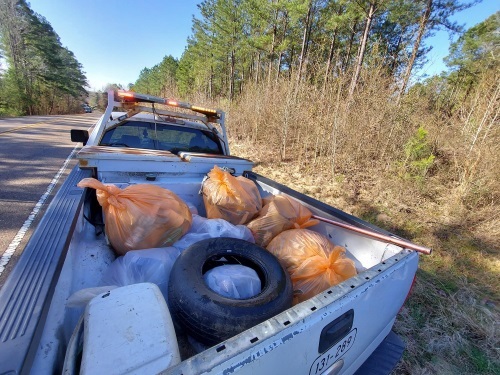 The Louisiana Department of Transportation and Development recently implemented a new policy for its field crews to pick up trash in the footprint where they work for the day.

Called the ‘Take 10’ campaign, it commits agency work crews to take 10 minutes per day at their job sites to pick up highway litter.

“I try to never ask anyone to do anything that I’m not willing to do myself,” said Shawn Wilson, Ph. D., Louisiana DOTD’s secretary, in a statement. “I know I’m asking my employees to stop doing necessary maintenance work for 10-15 minutes a day to remove trash that should’ve never been put there in the first place. But my long-term vision is to get to a point where this policy is no longer necessary and that we’re no longer spending millions to help correct a 100 percent preventable problem.”

Louisiana DOTD added that roadway litter also often washes into lakes, bayous, and other state waterways – which is not only unattractive, but also potentially deadly for wildlife. Such trash can also clog drainage systems and lead to flooding of streets and homes, the agency said.

The Louisiana DOTD is also issuing a challenge to local municipalities to implement the same ‘Take 10’ policy for their field crews.

“For the local entities that may already be doing this – I say, ‘thank you.’ And I challenge the others to join us in the fight against litter to help keep Louisiana beautiful,” Wilson noted.

“The goal is to improve the communities where we work, play and live, but governmental agencies can’t do it alone,” he emphasized. “We also need commitments from the general public to not litter in the first place, as well as to pick up trash when you see it and when it’s safe to do so.”

State departments of transportation are regularly engaged in a variety of trash-removal efforts and litter education campaigns.

The North Carolina Department of Transportation is gearing up for its annual Spring Litter Sweep​ to remove trash from along the state’s roadways, which will run from April 10-24 this year. To date, the agency said its crews, contractors, and volunteers have already collected some 3.1 million pounds of litter since January 1.

The Oklahoma Department of Transportation and Keep Oklahoma Beautiful are teaming up for a one-day “Trash Off” statewide highway cleanup effort on April 17.

The South Carolina Department of Transportation noted that 1,700 of its employees picked up 13,130 bags of roadside trash weighing 209,725 pounds on November 17, 2020, in support of Lt. Gov. Pamela Evette’s “Grab A Bag SC 2020” statewide cleanup program.

The Virginia Department of Transportation launched a public outreach campaign entitled Virginia is for Lovers, Not Litter in September 2020.

The agency noted that it spends nearly $3.5 million annually to remove litter from Virginia’s roadways, with more than half of that litter coming from motorists with another 25 percent from pedestrians.

That study found that Pennsylvania’s cities collectively spend more than $68 million annually on cleanup, education, enforcement, and prevention efforts related to litter and illegal dumping, the study found, with PennDOT spending upwards of $13 million per year on staff and resources to pick up litter along state-owned roadways.