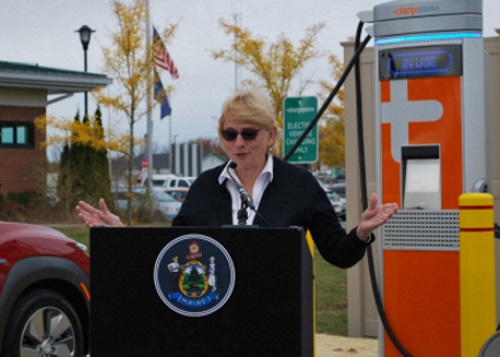 Governor Janet Mills (D) (seen above) recently signed an executive order accelerating Maine’s progress in reducing greenhouse gas emissions from transportation by calling for the creation of a “clean transportation roadmap” this December to highlight how the state can increase the number of electric vehicles or EVs operating on its roads by 2030.

[Above photo by the Maine Governor’s Office.]

That roadmap seeks to develop recommendations to enhance the EV market in Maine, such as expanding charging infrastructure, evaluate effects on electric utilities and the grid, and ensure an equitable and affordable transition to clean transportation for all people in Maine.

Reducing emissions from transportation – which the governor’s office said it the source of more than half of all the state’s greenhouse gas emissions – serves as a key piece of Maine’s overall effort to curb state emissions by 45 percent by 2030.

“A clean transportation roadmap is a proactive step that will allow Maine to address future transportation needs while contributing to the work against climate change,” noted Bruce Van Note, Maine DOT’s commissioner, in a statement. “Increased consumer interest in electric vehicles coupled with delivery commitments from automakers will help put us on a path to a clean transportation future.”

“As electric vehicle technology advances and more models become available to consumers, Maine needs to ensure we have an electric grid that can support this growth,” said Dan Burgess, director of the Governor’s Energy Office. “The clean transportation roadmap will begin to address the grid impacts and rate design needs to support this transition, grow the clean energy economy, and make significant progress against climate change.”

The action by Gov. Mills on EVs in Maine mirrors similar efforts occurring in other states, by state departments of transportation, public utility companies, and others.

In early February, the California Department of Transportation finished installing 22 new “fast-charging” stations for EVs at nine locations along the state’s highway network.

Coinciding with that effort, the Pacific Gas and Electric Company and automaker BMW kicked off phase three of their six-year “ChargeForward” pilot program to further explore how “incentivizing” EV owners to shift their charging times can help meet the needs of the electric grid while also taking advantage of excess renewable energy during the day.

On top of that, in early March, six energy utility companies joined forces to outline plans for building a “seamless network” of EV charging stations connecting major highway systems from the Atlantic Coast, through the Midwest and South, and into the Gulf and Central Plains regions.

Those projects include – but are not limited to – connected autonomous vehicle or CAV infrastructure, solar-powered photovoltaic EV charging stations, and in-road dynamic wireless EV charging.