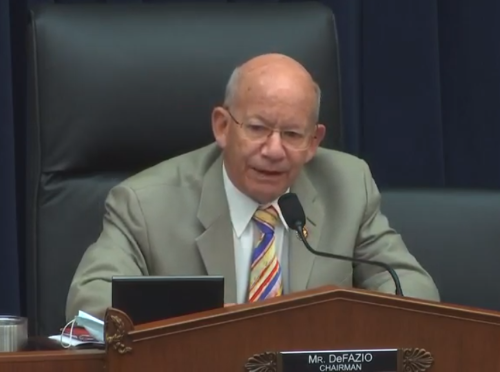 During a virtual infrastructure summit this week, Rep. Peter DeFazio (seen above), D-Ore. – chairman of the House of Representatives Committee on Transportation and Infrastructure – reiterated his focus on passing a nearly $500 billion surface transportation reauthorization bill out of his committee by the third week of May.

“We have to do a reauthorization by October 1,” he said during the April 6 summit, hosted by the Connecticut Construction Industries Association (CCIA). “My objective is to get an authorizing bill out of my committee [and] get it through the House as soon as possible.”

Rep. DeFazio noted that his reauthorization bill would closely mirror $494 billion INVEST in America Act legislation adopted by the House T&I Committee in June 2020 by voice vote. That bill formed part of a $1.5 trillion infrastructure package dubbed the Moving Forward Act the House passed in July 2020; legislation that was never considered in the Senate.

The nearly $500 billion price tag of Rep. DeFazio’s reauthorization bill could conflict with other infrastructure priorities of the Biden administration.

For example, the administration recently proposed spending $115 billion to modernize bridges, highways, roads, and main streets as part of its $2.3 trillion American Jobs Plan, which would fund transportation programs above the base programs authorized by the Fixing America’s Surface Transportation or FAST Act.

The Biden Harris administration also proposed a $1.5 trillion fiscal year 2022 budget for the federal government on April 9 – $118 billion higher than the regular 2020 appropriations – that features a significant 16 percent boost in non-defense spending.

The $769 billion non-defense portion of that budget request – which covers the U.S. Department of Transportation, Department of Justice, and Department of Education, among others – represents a $105.7 billion increase above current funding levels.

Rep. DeFazio also noted during the CCIA’s infrastructure summit that how to pay for a surface reauthorization bill remains a big question.

“At this point, it’s not at all clear to me what will be the funding source,” he explained, noting that how to pay for surface reauthorization is not within his committee’s jurisdiction.

“I don’t know how it’s going to be funded. But we have to do this,” Rep. DeFazio said.

“It is critical that Congress and the administration work together in a bipartisan manner to reauthorize the federal surface transportation programs before the end of September,” stressed Jim Tymon, AASHTO’s executive director, in a recent statement.

“A long-term and robust reauthorization bill will provide state DOTs the predictability they need to continue to improve the transportation network to provide greater access to opportunities for everyone including employment, education, health services, and recreation,” he said.

Victoria Sheehan – commissioner of the New Hampshire Department of Transportation and AASHTO’s 2020-2021 president – highlighted several of the organization’s key reauthorization principles during testimony before the Senate Committee on Environment and Public Works on February 24.

“States like New Hampshire rely especially heavily upon the federal surface transportation program in order to enable the necessary infrastructure investments for our citizens,” she explained in her testimony.

“Any [reauthorization legislation] delay – or even worse, a series of short-term extensions – would wreak havoc across the country and would impact not just state DOTs, but our partners such as local governments and the construction industry,” Sheehan said.