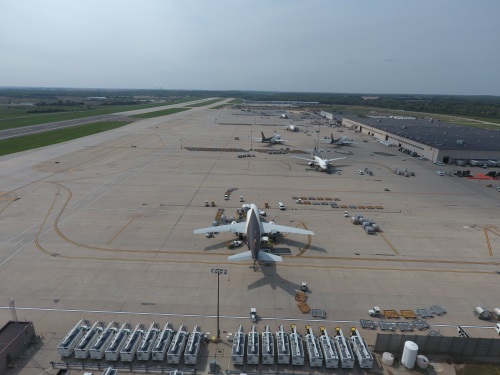 Business is booming at 14 major cargo-focused hub airports across the United States, according to a 12-page policy brief recently issued by the Chaddick Institute for Metropolitan Development at DePaul University.

[Above photo by the Chicago Rockford International airport.]

That brief indicated that, based on an analysis of Bureau of Transportation statistics, tonnage increased at those airports by 31.4 percent between 2019 and 2010, with seven of the largest 10 of those hubs recording freight traffic growth of 18 percent of more.

The Chaddick Institute noted in its policy brief that “cargo-focused hub” airports garner extensive cargo traffic but little or no passenger traffic.

For instance, the 14 major cargo hub airports noted in its policy brief receive at least 20 million pounds of domestic air cargo annually yet handle fewer than 310,000 passengers. Being under the 310,000 passenger threshold means those hubs don’t get ranked among the top 200 commercial airports in the United States, the Institute said.

The Institute noted that the largest of those cargo-focused hub U.S. airports are Chicago Rockford International in Illinois, the Ft. Worth Alliance airport in Texas, Wilmington Air Park in Ohio, and Boeing Field/King County International airport in Washington state. It added that growth at cargo-focused hub airports has far outpaced growth at mixed purpose airports, which have more “balanced” passenger/cargo air traffic.

The rapid growth of cargo-focused hubs stems from various factors, the Chaddick Institute noted in its brief, including the growing ease and decreased cost of at-home package delivery and a dramatic shift in “consumer behavior” as a result of the COVID-19 pandemic – namely a switch to e-commerce purchasing.

“Surging volumes of traffic from the fulfilment centers of online retailers to homes and businesses have greatly altered the way our country uses its highways, streets, and airports,” the Chaddick Institute said in its brief.

“In the process, cargo-focused hub airports have shouldered a much heavier burden than in the past, with tonnage growing much faster than at mixed purpose airports. [And] more growth is expected throughout 2021,” it noted.

Several state department of transportation studies – including ones from Georgia, Wyoming, and Alaska – show that airports, cargo-only as well as mixed-purpose facilities, function as significant “economic engines” as well as key mobility hubs.

Those losses are in addition to the $23 billion U.S. airports are expected to lose between March 2020 and March 2021, the group added.