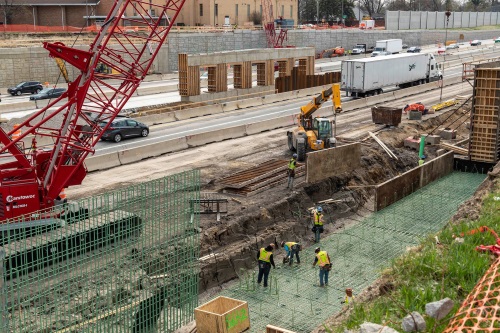 The American Association of State Highway and Transportation Officials and 17 other organizations sent a joint letter to key Congressional leaders on April 15 calling for more funding to close a $756 billion “investment gap” in the nation’s surface transportation system.

“We request Congress to authorize $200 billion in highway and bridge stimulus or ‘down payment’ in the infrastructure package, available to be obligated through 2026 at 100 percent federal share,” the letter said in reference to the recent American Jobs Plan stimulus unveiled by the Biden administration on March 31.

“We also ask that you to provide $487 billion for the Federal-aid Highway Program as part of the upcoming five-year surface transportation reauthorization due by October 1,” the letter continued. “If these robust investments are paired with $846 billion in the subsequent five year reauthorization from 2027 to 2031, we as a nation can finally tackle the ever-looming highway and bridge backlog once and for all.”

The $756 billion investment “backlog” figure cited by AASHTO in the joint letter is based on the methodology used in Status of the Nation’s Highways, Bridges, and Transit: Conditions & Performance Report, 23rd Edition published by the US Department of Transportation – a backlog composed of system rehabilitation, enhancement, and capacity needs for highways and bridges.

Congress was also asked to use existing highway and transit formulas and existing rail grant programs to provide those requested funds, as long-standing formula funding methodology – used to disburse Highway Trust Fund revenues to the states – provide fiscal support “in the quickest and most efficient manner, all the while flowing to every part of the country.”

The letter noted that with a five-year obligation time those infrastructure package investments should be able to support programs and projects that generate the most benefits through the entire lifecycle of assets – ranging from routine improvements that can provide immediate economic stimulus to major improvements that can substantially transform the network.

Lastly, the letter’s signatories asked that any infrastructure package funding should be provided at 100 percent federal share in order to “recognize the ongoing revenue losses” experienced by state DOTs and transit agencies due to the COVID-19 pandemic.

“Since the early response to the pandemic, state DOTs have faced severe losses in state transportation revenues as vehicle travel declined,” noted Jim Tymon, AASHTO’s executive director, in a statement issued in response to state DOTs receiving $10 billion in long-awaited emergency aid from a $900 billion COVID-19 relief measure passed by Congress in December 2020.

“Furthermore, this timely federal support will help state DOTs to retain their institutional capacities and to be prepared to deliver future infrastructure investment driving economic recovery and growth,” he added.