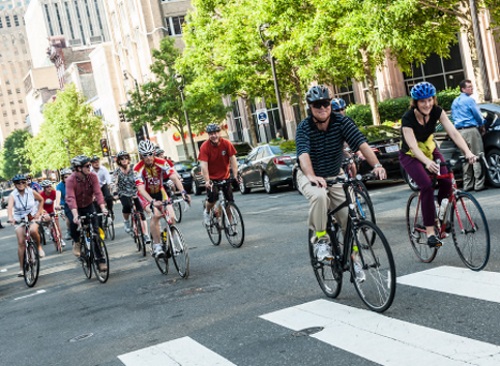 The North Carolina Department of Transportation is now accepting applications from municipalities across the state for its 2021 Bicycle and Pedestrian Planning Grant Initiative, which seeks to support the development of comprehensive bicycle or pedestrian plans. The deadline for applications is June 30.

In terms of specifics, NCDOT said in a statement that while all North Carolina municipalities are eligible to apply for that funding, counties with populations of less than 50,000 could apply for a bicycle or pedestrian plan while smaller municipalities with populations of less than 10,000 can apply to develop combined bicycle and pedestrian plans.

Additionally, municipalities with populations of​​ ​less than 5,000 may apply for a Project Acceleration Plan – an abbreviated plan primarily focusing on priority project identification and implementation – while municipalities and counties with populations of less than 50,000 with a bicycle or pedestrian plan already in place can apply to update their plan if it is at least five years old.

NCDOT’s bicycle and pedestrian planning grant program – sponsored by the department’s Integrated Mobility Division and the Transportation Planning Division since 2004 – usually awards a total of $7 million on a yearly basis.

The agency added that it is hosting a short webinar on May 12 to provide further details about its bicycle/pedestrian grant program and answer questions from potential applicants.

States across the country are broadly working on ways to improve safety for bicyclists and pedestrians.

For example, a new report from the Governors Highway Safety Association showed that while pedestrian fatalities trended up in the first half of 2020, it noted how several state-directed efforts are successfully improving pedestrian safety.

GHSA’s report noted that most pedestrians are killed on local roads, in the dark, and away from intersections – suggesting the need for safer road crossings and increased efforts to make pedestrians more visible through improved lighting and other countermeasures.

The National Transportation Safety Board reported similar findings during a hearing in November 2019.

As a result, that agency called for more “concerted action” from federal and state agencies to improve bicyclist safety – and, by extension, that of pedestrians – via improvements to roadway infrastructure, enhanced bicyclist conspicuity, and the “mitigation of head injuries” to bicyclists through mandatory helmet laws.