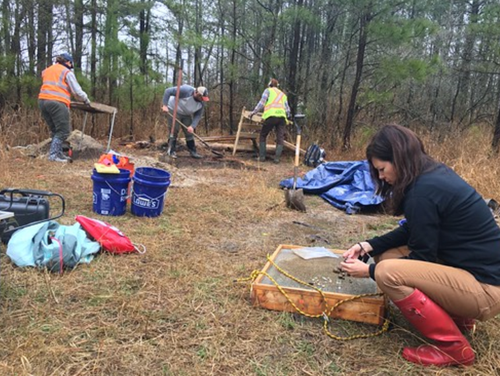 An archaeology team led by the Maryland State Highway Administration – a division of the Maryland Department of Transportation – recently helped discover a historic homesite once owned by the father of famed abolitionist Harriet Tubman, who helped slaves escape north via the Underground Railroad.

The agency’s team discovered the former home of Harriet Tubman’s father, Ben Ross, on property acquired in 2020 by the U.S. Fish and Wildlife Service or USFWA as an addition to Blackwater National Wildlife Refuge in Dorchester County.

USFWS purchased the 2,600-acre Peter’s Neck property for $6 million from the Federal Duck Stamps program to provide pathways for future marsh migration and as a locale for outdoor recreation. The property contains 10 acres bequeathed to Ben Ross by his then-owner Anthony Thompson in the 1800s. Ben Ross received the land in the early 1840s five years after Thompson’s death, in accordance with Thompson’s last will and testament.

The Maryland SHA archaeology team, led by Chief Archaeologist Julie Schablitsky, began searching for evidence linked to Ben Ross in November 2020. When they returned in March 2021 to continue their search, Schablitsky said her team found numerous artifacts dating to the 1800s, including nails, brick, glass, dish fragments, and even a button – artifacts that provided evidence of Ben Ross’s cabin.

“The importance of discovering Ben Ross’ cabin here is the connection to Harriet Tubman. She would’ve spent time here as a child, but also she would’ve come back and been living here with her father in her teenage years, working alongside him,” Schablitsky said in a statement.

She noted that Harriet Tubman – born Araminta Ross in March 1822, on the Thompson Farm near Cambridge in Dorchester County – learned to navigate difficult terrain while working with her father on the property cutting and selling timber, transported by free black mariners to Baltimore shipyards for ship building firms.

Interacting with mariners also provided knowledge of waterways on the East Coast, which may have helped Tubman lead people to freedom via the Underground Railroad.

“This was the opportunity she had to learn about how to navigate and survive in the wetlands and the woods,” Schablitsky noted. “We believe this experience was able to benefit her when she began to move people to freedom.”

The Federal Highway Administration provided funding for this archaeological dig and has provided funding to support operation of the Harriet Tubman Underground Railroad Byway because of the link to Maryland’s transportation network.

“The Harriet Tubman Underground Railroad Byway connects travelers from around the world to a heroic figure in American and Maryland history, and to the beauty of our Eastern Shore and the Chesapeake Bay,” noted Greg Slater, Maryland DOT’s secretary.

“This discovery solidifies another link between transportation and our nation’s history and it’s our duty and honor to preserve this history so it may be shared with generations to come,” he said.