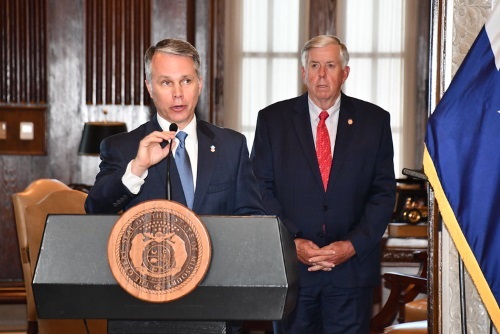 The American Association of State Highway and Transportation Officials has appointed Patrick McKenna (seen above at podium, with Missouri Governor Mike Parsons in background), executive director of the Missouri Department of Transportation, to serve a two-year term as chair of the organization’s Committee on Safety.

McKenna also served as AASHTO’s 2019-2020 president and made transportation safety one of his key “emphasis areas” during his one-year term.

“Safety is the very basis of transportation,” McKenna explained during a roundtable discussion held during AASHTO’s 2020 Washington Briefing – noting, for example, that about 10 percent of the nation’s drivers do not buckle up every day – and those drivers represent more than 50 percent of highway fatalities.

He also helped establish Missouri’s “Buckle Up Phone Down” safety campaign in early 2017 to encourage motorists across the state to always buckle their seat belts while driving and to not use cell phones and other electronic devices when behind the wheel.

McKenna joined MoDOT as executive director in 2015 following a three-year stint with the New Hampshire Department of Transportation. He holds a Bachelor of Science degree in Finance from Bentley College – now Bentley University – and a Master of Science in Management and Finance from the University of Maryland University College.