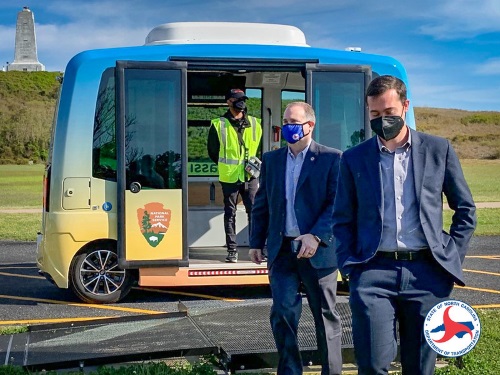 The North Carolina Department of Transportation and the National Park Service recently began a three-month pilot test of a self-driving shuttle bus at the Wright Brothers National Memorial in Kill Devil Hills.

Known officially as the Connected Autonomous Shuttle Supporting Innovation or CASSI, the vehicle – leased from EasyMile – navigates using light detection and ranging or LiDAR sensors and GPS used to map and monitor a fixed route.

Sensors continuously scan the shuttle’s surroundings and signal for it to stop when an obstacle is too close, NCDOT noted.

The agency added that, as part of this pilot test, a trained customer service operator rides in the vehicle – which operates at speeds between 8 mph and 12 mph – to monitor travelling conditions and stop the vehicle at any time, providing an extra layer of safety for passengers.

[Editor’s note: The Utah Department of Transportation conducted a similar test using an Easy Mile self-driving shuttle, this one 12 months long, in partnership with the Utah Transit Authority.]

Though rides on the CASSI are free, NCDOT noted that the number of passengers is limited due to the size of the vehicle, with passengers asked to follow COVID-19 safety protocols during rides, including mask wearing and physical distancing.

The NCDOT also noted it is working with TransLoc to provide real-time tracking software and a map to keep riders updated on CASSI’s location on the agency’s website.

“We think the CASSI represents the start of another revolution for transportation,” noted Eric Boyette, NCDOT’s secretary, in a statement, adding that this pilot test will help the National Park Service and NCDOT learn more about driverless vehicle operation – collecting data on the number of passengers carried, trip mileage, and vehicle battery usage.

“[We are] excited about building upon the Wright brothers’ legacy of transportation innovation through this first-of-its-kind shuttle demonstration and through a successful partnership with NCDOT,” noted David Hallac, superintendent for the National Parks of Eastern North Carolina.

“This exploratory initiative will inform the park service’s use of autonomous transportation systems in the future,” he said.

Other state departments of transportation are conducting similar tests. The Rhode Island Department of Transportation, for one, launched a self-driving shuttle bus test in May 2019. Dubbed the “Little Roady Shuttle,” the experimental service operates seven days a week along a 12-stop, 5.3-mile circuit.

Deploying such self-driving shuttles, as well as “robo-taxis,” for short trips in urban locales is considered key to increasing acceptance of the technology among travelers, according to a study published in 2018 by the World Economic Forum and the Boston Consulting Group.

“These [robo-taxi] offerings become more price-competitive as the trip time shortens,” the study explained. “A shared autonomous taxi at $0.35 per mile is less expensive than a bus ride for trips under six miles – and it provides an experience with guaranteed seating and more convenient start and end locations.”