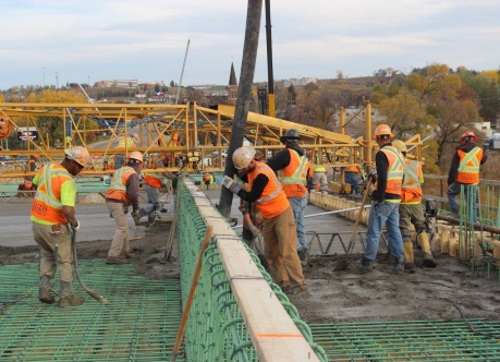 The governor noted that the bonding bill is a “win for taxpayers” as it provides a “reliable repayment mechanism” due to its reliance on Legacy Fund earnings to make bond payments instead of raising taxes.

“With historic low interest rates, investing in infrastructure now is the financially conservative thing to do,” the governor said in a statement.

“We will save tens if not hundreds of millions of dollars for our state and political subdivisions over time versus waiting for years and paying cash,” he said. “That’s just smart economics, and it’s going to save our taxpayers dollars.”

“North Dakota and Manitoba have a long and rich history of friendship and co-operation, and this vaccination initiative is an opportunity to strengthen that bond by offering assistance that will protect public health and the flow of goods and services on both sides of the border,” Gov. Burgum explained in a statement.

“With adequate vaccine supplies and all North Dakotans having access to vaccine while Canada is dealing with a vaccine shortage, we want to do our part to ensure essential workers from Canada who are frequently traveling through our state are vaccinated,” he added. “The timely and effective administration of vaccines is essential for public health and the eventual safe reopening of our shared border.”

Manitoba Trucking Association and its members will coordinate with North Dakota and Manitoba government workers to schedule vaccination appointments for truck drivers during their routine trips to the United States over the next six to eight weeks – with roughly 2,000 to 4,000 Manitoba truck drivers expected to participate in this inoculation program.

The North Dakota Department of Transportation’s rest area near Drayton will initially serve as the main vaccination site for this program; an inoculation effort that will also be open to North Dakotans aged 16 and older. Vaccinations will take place from noon to 8 p.m. on Wednesdays, Thursdays, and Fridays.

The North Dakota Department of Health will provide nurses and other staff to administer the first and second doses of the vaccine to provide full immunization of truckers. There is no cost to the state or province as the U.S. government supplies the vaccine and reimburses all administrative costs, Gov. Burgum’s administration noted.