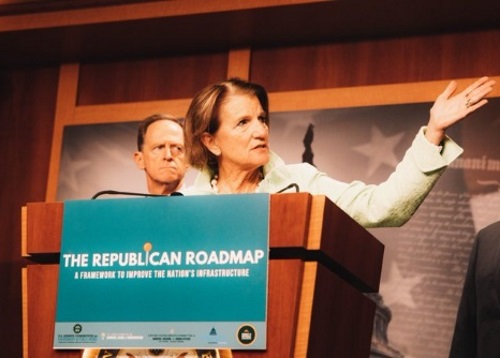 A group of five key Republican senators unveiled a five-year, $568 billion infrastructure investment framework on April 22 to serve as an alternative to the $2.3 trillion American Jobs Plan proposed by President Biden on March 31.

“It’s important that any infrastructure legislation have adequate funding levels and not be so large as to fail to launch, which means sticking to actual infrastructure,” explained Sen. Capito in a statement. “That’s why our framework works. It serves as a realistic, thoughtful approach that addresses the core areas of infrastructure that we all agree upon.”

The breakdown of the infrastructure funding within the Republican plan includes:

The senators said that four key “goals” lay at the heart of the their plan: Boosting economic growth, improving global competitiveness, and creating jobs; improving the quality of life for all Americans; strengthening national security and continuing to improve safety; bolstering infrastructure so it can withstand extreme weather events and natural disasters, all while protecting the environment.

The plan would also specifically preserve all of the provisions of the 2017 Tax Cuts and Jobs Act, which set the corporate tax rate at 21 percent. It also proposes levying user fees on electric vehicles to replace reductions in motor fuel tax revenue flowing into the Highway Trust Fund. It would also “repurpose” unused federal spending allocated by the $1.9 trillion American Rescue Plan to cover the infrastructure investments proposed within Republican plan.

“Congress and the Biden administration must reach a bipartisan agreement that will improve the infrastructure in all states and communities, while achieving important national goals,” according to the plan. “This framework is meant to serve as a guide as we continue to develop bipartisan bills that will move by regular order.”

Jim Tymon, executive director of the American Association of State Highway and Transportation Officials, said in a statement that AASHTO has “long called for a bipartisan approach” to address the nation’s transportation and infrastructure needs.

“Senate Republicans have put forward a proposal that recognizes the value of using proven existing programs and increasing funding for infrastructure over current levels. But this is only one further step in the process,” he said.

“We look forward to Republicans and Democrats working with the Administration to reach a bipartisan agreement that significantly increases investment and modernizes our nation’s infrastructure as soon as possible,” Tymon added.