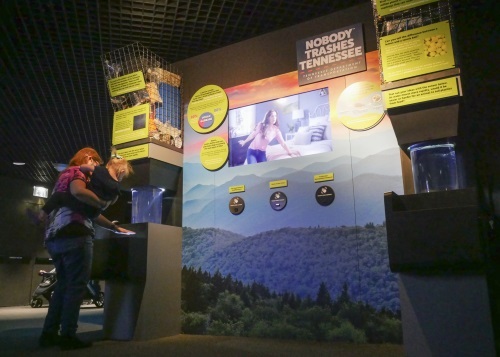 A pair of new exhibits at the Tennessee Aquarium funded by the grants from the Tennessee Department of Transportation illustrate how microplastics and other roadside trash can negatively affect the health of the ocean as well as rivers, lakes, and streams.

[Above photo by the Tennessee Aquarium]

The new exhibits – housed in the Aquarium’s “River Journey” and supporting the Tennessee DOT’s “Nobody Trashes Tennessee” litter reduction campaign – includes actual debris taken from the banks of the Tennessee River.

The exhibits demonstrate the connection between land-based pollution and aquatic ecosystems through “touchless” interactive elements, informative videos, and an exhibition of invasive aquatic wildlife such as a Northern Snakehead and Grass Carp.

Those non-native fish are housed in one of the exhibits, swimming alongside examples — some of them 3D-printed — of common roadside debris such as tires and car batteries, which can wreak havoc on aquatic systems.

“The ‘Nobody Trashes Tennessee’ campaign aims to educate citizens on the impact of what may be perceived as a minor issue for the state,” Bible added. “In reality, the state spends more than $19 million each year to clean up the more than 100 million pieces of litter on our roadways. We are pleased to partner with the Tennessee Aquarium on these interactive exhibits.”

The exhibits help visitors visualize how trash can imperil aquatic ecosystems and impact waterways that millions rely on for recreation and drinking water, while also demonstrating how changes in behavior on land can benefit the health of nearby waterways, explained Dr. Anna George, the Aquarium’s vice president of conservation science and education.

“Anything that is on land moves into our waterways,” Dr. George said. “If a piece of litter is thrown onto a street, wind might carry it to a stream or river. It might get washed or blown into storm drains and deposited in the nearest body of water. It is a safe assumption that any debris on land has a good chance of winding up in our water.”

According to the National Oceanic and Atmospheric Administration, 80 percent of garbage found in the ocean comes from inland sources, such as leaked automotive fluids and littering.

“So even though the [Tennessee] Department of Transportation might seem like an odd partner for an aquarium, there’s a fundamental connection between activity on land and the health of waterways,” Dr. George noted.