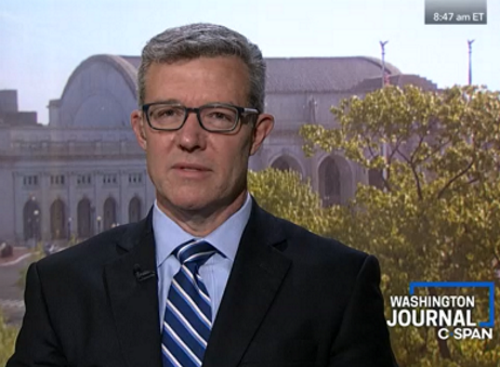 Jim Tymon (seen above) – executive director of the American Association of State Highway and Transportation Officials – discussed the need for significant investment in U.S. infrastructure during an interview this week on C-SPAN’s public affairs program Washington Journal.

“We’ve clearly been underinvesting in infrastructure for a number of years,” he explained. “Meanwhile, state and local governments are stepping up – half of the states have increased [financial] resources for infrastructure over the last few years. But it’s been 30 years since the federal government increased the gas tax.”

While the current infrastructure investment proposals being proffered are very different in terms funding levels – Biden’s $2.3 trillion American Jobs Plan versus a Senate Republican proposal for $568 billion in funding – Tymon stressed that the “important part is that this shows there is strong bipartisan interest for investing in transportation infrastructure. It is a great starting point.”

He also emphasized that it is “hard” to pick one mode of transportation that should come first in terms of funding because the nation’s transportation network as a whole has suffered for long-term underinvestment.

Yet he also noted that the term “infrastructure” should be broadened to a degree to include items such as broadband – especially to rural areas of the country. “The [COVID-19] pandemic has shown importance of every community across the country having access to broadband in order to connect to the internet to go to work and for kids to go to school,” Tymon said.

He also pointed out that the pandemic highlighted the need to focus a good portion of transportation project oversight at the local and state level.

“From a transportation planning standpoint, projects start at the state and local level,” Tymon emphasized. “So in order for them to advance and receive funding, they must be priorities for local communities and state governments.”

Those “priorities” also include a focus on workforce development so the transportation industry has enough skilled labor on hand to build the projects funded by federal infrastructure investments.

[Editor’s note: Workforce development is one of the emphasis areas of Victoria Sheehan, AASHTO’s 2020-2021 president and commissioner of the New Hampshire Department of Transportation.]

“We need to make sure we do whatever we can to train workers with the skills sets we need to successfully invest in our nation’s infrastructure,” Tymon explained. “We definitely see a shortage in skilled labor categories, so it is important for us to reach out and recruit folks into the construction industry and give them the training they need.”

He added that many of those jobs won’t be “standard” construction jobs going forward, either. “There is a greater use of technology to better build, maintain, and operate our transportation assets,” he said. “Technology is really starting to play a major role.”

While paying for infrastructure investments remains a difficult subject, especially where tax increases are concerned, Tymon noted that many options are on the table.

“That’s why we need to look at how we fund infrastructure investment and look at other options out there,” he noted. “Great examples come from Oregon, Utah, Washington state, and California in terms of how to implement a fee-for-the-miles-you-drive approach. States on the East Coast have also participated in a similar regional program, testing a vehicle miles travelled or VMT fee.”

Tymon explained that it’s now time to take the next step and deploy the “great work” states have engaged in over the last 10 years or so in terms of developing ways to replace fuel taxes as the main source of surface transportation funding.

“As vehicles become ever more fuel efficient and use other power sources, such as electricity, we need different funding options,” he said. “We need to build on the successes of state level VMT programs. States have demonstrated that they can work.”