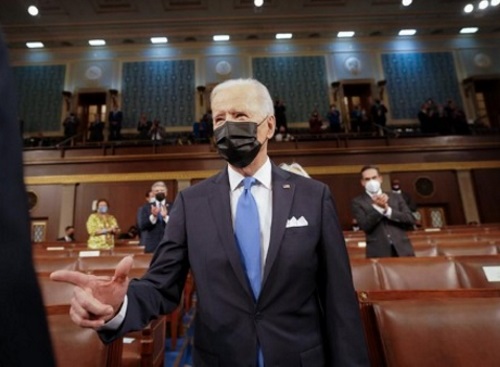 To support “the fastest pace of economic growth in this country in nearly four decades” and help America compete better against “China and other countries to win the 21st Century,” President Joe Biden (seen above) re-emphasized his call for beefed up infrastructure investments.

“Throughout our history, public investments and infrastructure have transformed America,” he said during his joint address to Congress on April 28.

“The transcontinental railroad and interstate highways united two oceans and brought us into a totally new age of progress,” President Biden added. “These are the investments we make together, as one country, and that only government can make. Time and again, they propel us into the future.”

The president also touted his $2.3 trillion American Jobs Plan as a way of not just improving the nation’s infrastructure but creating jobs as well.

“This is a once-in-a-generation investment in America itself; the largest jobs plan since World War II,” he said. “It creates jobs to upgrade our transportation infrastructure. Jobs modernizing roads, bridges and highways. Jobs building ports and airports, rail corridors and transit lines.”

Jim Tymon, executive director of the American Association of State Highway and Transportation Officials, noted in a statement that AASHTO continues to appreciate the President’s emphasis on infrastructure and its value to the nation’s economic prosperity and quality of life.

“State departments of transportation stand ready to work with Congress and the Biden administration to reach a bipartisan agreement that significantly increases investment and modernizes our nation’s infrastructure,” Tymon said.

President Biden also pointed out that parts of his infrastructure proposal that aim to battle “climate change” would also create jobs and new transportation alternatives.

“For me, when I think about climate change, I think jobs – [such as] electrical workers installing 500,000 charging stations along our highways,” he said. “[There is] no reason why American workers can’t lead the world in the production of electric vehicles and batteries.”

The president emphasized that “these are good-paying jobs that can’t be outsourced,” claiming nearly 90 percent of the infrastructure jobs potentially created by his American Jobs Plan would not require a college degree and with 75 percent not requiring an associate’s degree. “The American Jobs Plan is a blue-collar blueprint to build America,” he said.

President Biden also used his joint address to introduce the $1.8 trillion American Families Plan, which offers among other things to provide four-years of free post-high school education, a national comprehensive paid family and medical leave program, plus free childcare. Those investments he said would “build on the American Jobs Plan’s investments in school and child care infrastructure and workforce training.”