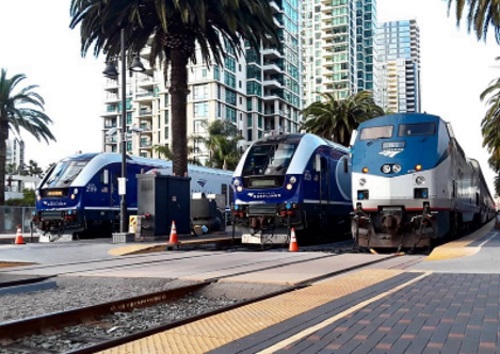 The Federal Railroad Administration officially made more than $1.69 billion available to Amtrak on April 27 to provide relief from the impacts of COVID-19 to the company’s business operations, workforce, and state funding partners.

FRA said in a statement that funding comes from the $1.9 trillion American Rescue Plan, signed into law on March 11, which allocated $100 billion to transportation concerns.

After experiencing its highest level of revenue in 2019, Amtrak said it faced an “unprecedented decline” in ridership since the start of the COVID-19 pandemic, forcing the national passenger railroad to furlough employees and reduce service levels in response to revenue shortfalls.

Amtrak said the $1.69 billion in emergency aid primarily go toward offsetting the loss of ticket revenue used for train operation and infrastructure maintenance. Amtrak is also now recalling furloughed employees and plans to restore long-distance services starting in late May.

FRA has obligated nearly $970 million of that relief funding for Amtrak’s Northeast Corridor or NEC and nearly $729 million to support Amtrak’s national network of state-supported and long-distance intercity passenger routes.

As part of this emergency funding package, FRA is allocating at least $109.8 million to help states and commuter railroads cover their share of capital costs associated with using the NEC.

It is also allocating $174 million to offset amounts that states are required to pay for covered state-supported routes along the national network – helping states cover their share of costs to have Amtrak operate state-supported service.

FRA added that the American Rescue Plan provides up to $100.8 million for debt relief that Amtrak incurred before March 11.

Meanwhile, Amtrak released its Fiscal Year 2020 Sustainability Report that highlights a variety of “sustainability projects” across its rail network.

Although travel slowed in 2020 due to the COVID-19 pandemic, Amtrak said it “continued planning the future of U.S. passenger rail” by developing its first solar power purchase agreement contract, developing tools to incorporate climate risks into capital planning, and initiating internal climate roundtables across various departments.

“By investing in innovative equipment and new technologies, protecting vital rail infrastructure from climate change, reducing greenhouse gas emissions, and expanding access to new communities, we can work together to create a future where intercity rail is operated on clean energy,” said Amtrak CEO Bill Flynn in a statement.

“Investment decisions made today position us to achieve these goals,” he added. “These visions and our strong sustainability story continue to evolve and grow every year.”